Bryan Wood uses Lucidchart to diagram a prospective client's network architecture—he has found that simplifying his message with a visual can be the difference between hundreds of thousands of dollars and zilch.

HIGHLIGHT PROPOSED CHANGES
Bryan makes his proposals more consumable by adding network diagrams from Lucidchart. At a glance, potential clients can evaluate whether the proposed solution aligns with their objectives, and Bryan can close deals worth thousands of dollars.
STORE DOCUMENTATION
Since Lucidchart integrates with Google Drive, Bryan can easily store his diagrams for future reference or send them to clients and remote employees.
SAVE TIME
With the intuitive interface and the built-in AWS shape library that Lucidchart offers, Bryan can create professional diagrams in half the time—and without the headache.

Based in Portland, Oregon, Columbia Ops has brought together a team of IT professionals and software developers to provide businesses with solution architecture consulting, development operations, database consulting, and related subjects.

You’ve probably heard that a picture is worth a thousand words. But how about a diagram being worth thousands of dollars? Bryan Wood takes credit for that one. He is a partner at Columbia Ops, a software development and architecture consulting company. Customers come to him seeking expertise on optimizing their network architecture, and he has found that a single diagram can explain a solution to a prospective client much more effectively than any number of words can. And when it comes to making such a visual, Bryan always turns to Lucidchart.

When Bryan first meets with a customer, they can spend up to three hours discussing the current problem and desired solution. He takes copious notes during this meeting to ensure he will have all the information necessary to work his magic.

Next, Bryan analyzes this information to identify improvements that could be made to the customer’s existing system to solve the customer’s problem. As part of this process, he uses Lucidchart to build high-level overview diagrams highlighting the major changes he proposes. It’s crucial that Bryan be able to convey the complex ideas surrounding how components integrate and behave in his proposed network structure, and these ideas can be difficult to communicate without visuals.

Once he has a fully formulated idea, Bryan creates a proposal for the client so they can evaluate whether his solution aligns with their objectives. He builds these proposals in Google Docs, leading his analysis with his Lucidchart diagram. According to Bryan, these visuals answer many client questions before they are even asked, saving significant communication time for all involved. "The diagram is just as much a part of the contract as the words,” Bryan says. “Writing a five-page document won’t get you as far as taking ten minutes to draw a diagram to explain these complex ideas.” 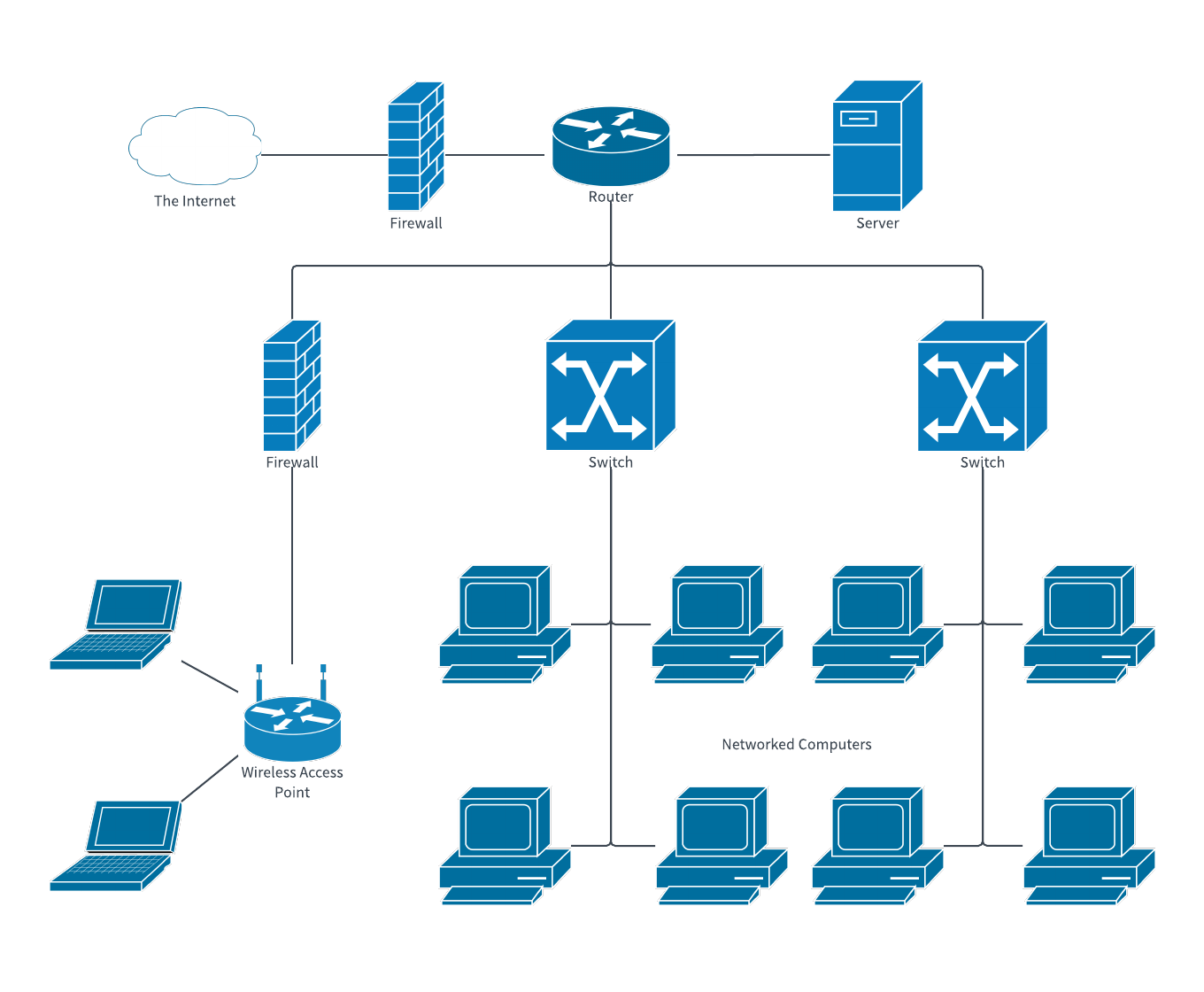 The diagram provides context for the two pages of bulleted points also included in the proposal, making the document as a whole more consumable. If needed, Bryan can also collaborate on a diagram with a customer or client until the final product meets all expectations.

In addition to providing clients with the physical proposal document, Bryan often presents his ideas as part of the approval process.

“My Lucidchart diagrams are the centerpieces for my presentations. They serve as a backdrop to a point I am trying to convey and are nonverbal ways of adding context—and they add far more context than words do.”

Bryan started out using Google Draw and Microsoft Visio for his diagramming but was frustrated with the “clunky” user experience. He found Lucidchart to be much more intuitive and more effective in portraying ideas. Bryan says:

“When you are presenting a solution to a problem, it’s all about the presentation. You have to get people to stay on the page long enough to get your point across. Using Lucidchart, I can get a polished product I am satisfied with in half the time. My diagrams look so professional yet take so little time, and I’m not frustrated while trying to make them.”

In his opinion, Lucidchart is essentially part of the Google product suite. Bryan also appreciates that Lucidchart is in the cloud. “I can access my diagrams anywhere from any device—which is something I just can’t do with Visio.”

While assisting clients, Bryan spends a significant portion of his time knee-deep in AWS architecture. Lucidchart offers an AWS shape library, allowing Bryan to find all the icons he needs to build his diagram without ever leaving the product. “There’s not another tool out there that builds AWS networks as well, even if I took the time to import the stencils to Visio or Google Draw. The shapes are all right there, so I can start mapping out my ideas right away.” AWS infrastructure changes often, and Bryan values how easy Lucidchart makes it to revise documents. 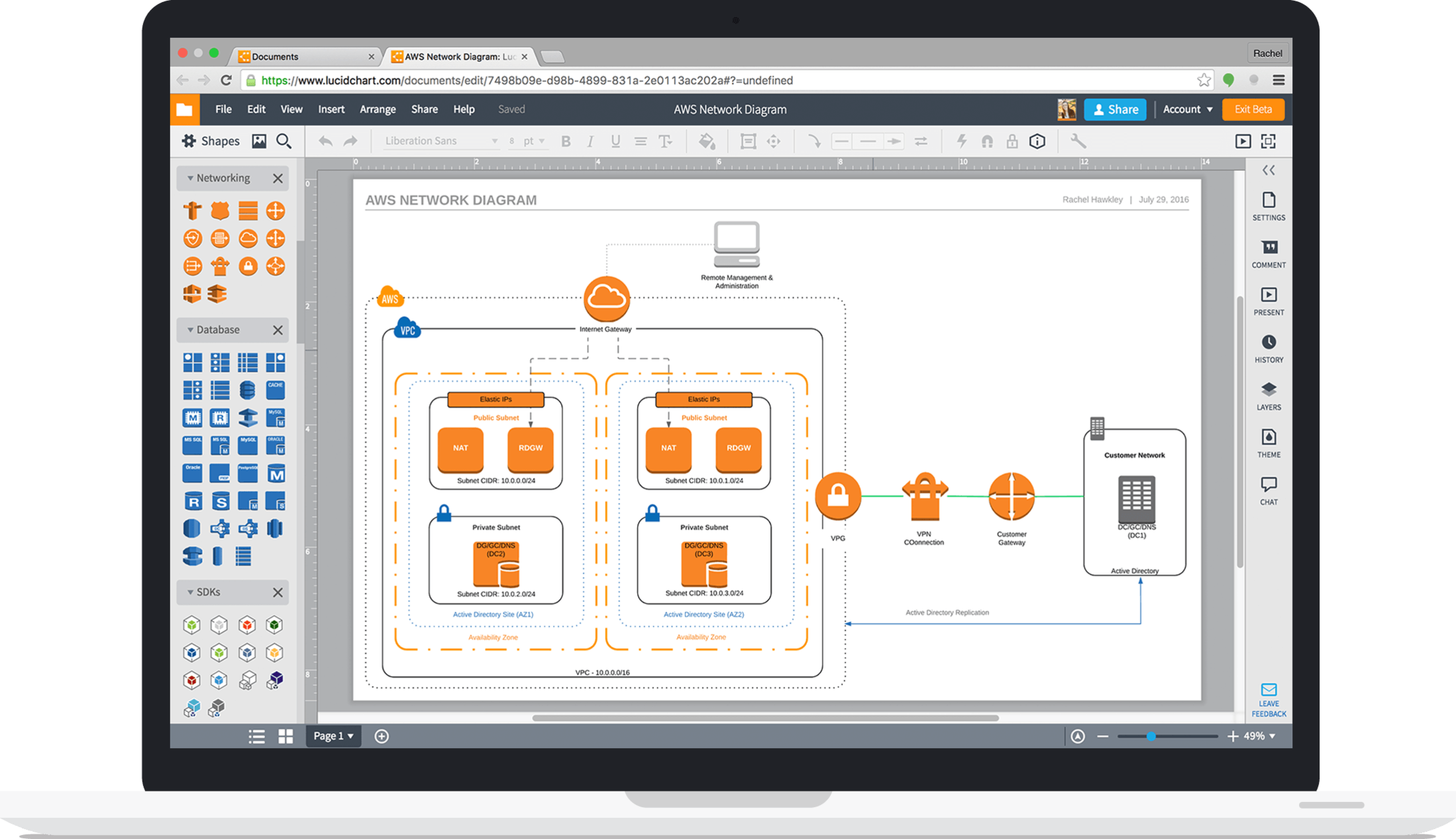 In addition to documenting clients’ systems, Bryan uses Lucidchart to monitor and update Columbia Ops’ own network architecture. “No one likes documentation, and it’s always an afterthought. It is very frustrating when documentation takes effort and time away from actually building.” And that is exactly why Bryan appreciates Lucidchart’s intuitive interface.

He uses the diagrams he builds for onboarding so that employees can quickly get up to speed and understand the current environment. He has also found Lucidchart to be one of the most effective communication tools for remote employees, as anyone can map out important workflows so those involved know how to proceed from one step to the next.

The best part is that Bryan only has to build all of these diagrams once—from here on out, it’s simply a matter of iterating upon the diagrams already stored in Lucidchart. Bryan has integrated Lucidchart with Google Drive, allowing him to store all his diagrams in his Google Drive folder for easy reference and editing.

“Reusability is another major benefit of Lucidchart for me. My diagrams always look so good, I want to be able to use them in several places. I know they will always be in my Drive folder, but I can also easily add them to emails, Google Docs, knowledge base articles, etc.”

The diagrams he creates for proposals then become documentation that can be updated as time goes on. Most of his customers also use Google Drive, allowing them to reference these diagrams at will without Bryan having to worry about exporting and emailing.

For Columbia Ops, a visual can be the difference between hundreds of thousands of dollars and zilch. Being able to provide a diagram that simplifies his message is very influential in gaining the buy-in from prospective clients necessary to move a contract forward. And using these visuals gives the company a competitive advantage, as a traditional ROQ leaves customers trying to make sense out of ten pages of heavy text.

“Lucidchart saves me a great deal of time—both in communication and in diagram creation. The ROI is tremendous, and the product isn’t that expensive in the first place—especially compared to Visio.”

A 10-minute diagram in exchange for a contract worth thousands—not a bad deal.