Rich, a systems analyst at Dealer Inspire, uses Lucidchart to visualize complicated ideas and workflows in order to keep the entire organization in sync and provide the optimal customer experience.

DOCUMENT AND ORGANIZE
As Rich gathers requirements for a new process, he documents them in Lucidchart. Using swimlanes, he can show which departments are involved and what their responsibilities will be. These visuals help keep everyone in sync to provide the optimal customer experience.
INCREASE UNDERSTANDING
Rich stores his diagrams in Confluence, which allows all team members to easily access them. The visuals help employees understand other team's responsibilities so they avoid oversimplification and help executives quickly come up to speed on a given process.
SIMPLIFY INFORMATION
Rich's diagrams increase understanding by simplifying industry jargon and catering to different learning styles. Team members are more invested in a project when they can better grasp the meaning behind it.

Dealer Inspire builds websites and technology to help auto dealers sell more. They have built products for every phase of the car buying process, making the journey easier, faster, and smarter for shoppers and dealers.

As a systems analyst at Dealer Inspire, Rich Simard’s daily conversations involve a lot of abstract ideas. He has all sorts of processes and workflows floating around in his head that he has to present to different departments to get endorsement and ensure alignment of segmented work between multiple teams—and that can be both ineffective and exhausting to explain over and over again. Rich explains:

“If you try to put into words and redescribe these things over and over again to different groups of people based on who's included in what meetings and who the stakeholders are, it can turn into this daunting waste of 20 minutes explaining something. Because they don't have anything to take away from the explanation to visualize and so they say, ‘Okay, tell me how this works again.’"

That’s why Rich uses Lucidchart to visualize all these ideas and workflows. While it takes him 15-20 minutes to explain an idea in person, it takes people only 30 seconds to understand when that same information is presented in a visual.

“If I had to explain all this stuff over and over again, I’d lose my voice. Instead I have the image saved somewhere, and when anybody new joins or anyone needs an inside look at the process, I simply hand over the visual.”

Rich learned about Lucidchart from his colleagues on the product team who used the platform to build a chatbot. And while he may not be developing chatbots, Rich believes the functionality of Lucidchart extends far beyond development projects—it’s extremely powerful for simply visualizing workflows. 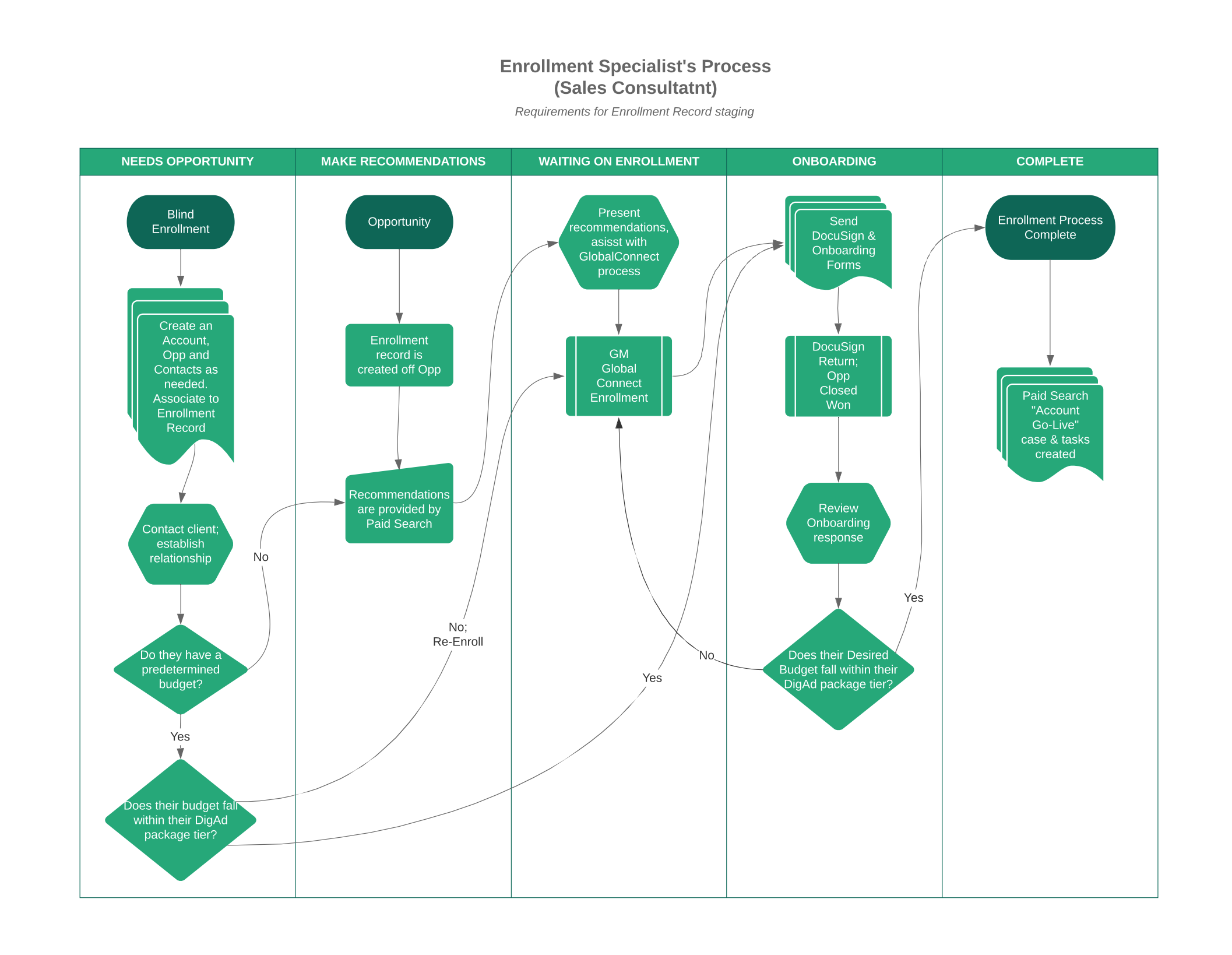 Rich was tasked with developing a new process for the company’s work with General Motors–it was a large project with a tight turnaround and not much context.

So he started his information gathering, meeting with the program manager and the OEM team member to understand expectations and requirements. As Rich gathered all these details, he started documenting it all in Lucidchart, using swimlanes to show the different departments who would be involved in the process and clearly delineating what the responsibilities of each would be. Within this diagram, he linked to other predefined processes that would be a part of this new one, ensuring that all necessary information lived one spot.

“It was really great because I was able to not only build these visuals to help myself maintain the logic but to also share them with everyone involved—it gets complicated with so many different people involved and so much feedback needed along the way.”

Since Dealer Inspire works with such a large variety of brands (they now work with nearly every large car manufacturer), they also have a wide variety of program requirements to keep track of and comply with every time they work with a certain brand. Each program has its nuances around how information will be delivered to Dealer Inspire and how the customer wants it returned to them, and mapping those specific requirements out in Lucidchart helps keep everyone in sync to provide the optimal customer experience.

Using Lucidchart’s Confluence integration, Rich imports his visual into a Confluence article so that everyone can access it. Or he can export the visual as a PDF and distribute it to the team as a reference. As a result, everyone at Dealer Inspire knows their role in meeting General Motors’ needs.

Having this information so accessible means employees develop a better understanding of other team’s responsibilities, helping everyone to work together more effectively.

“These visuals make the process more palatable for teams and help them understand how complex things can be—because when they stand back and they look at what another department is doing, it's so easy to oversimplify something.”

The Lucidchart visuals also help Rich work efficiently with executives when they come to him with ideas that may not fit within an existing process. Instead of wasting everyone’s time trying to explain something, Rich offers a visual that executives can quickly consume. As a result, they understand if their ideas can feasibly fit into existing processes and workflows. 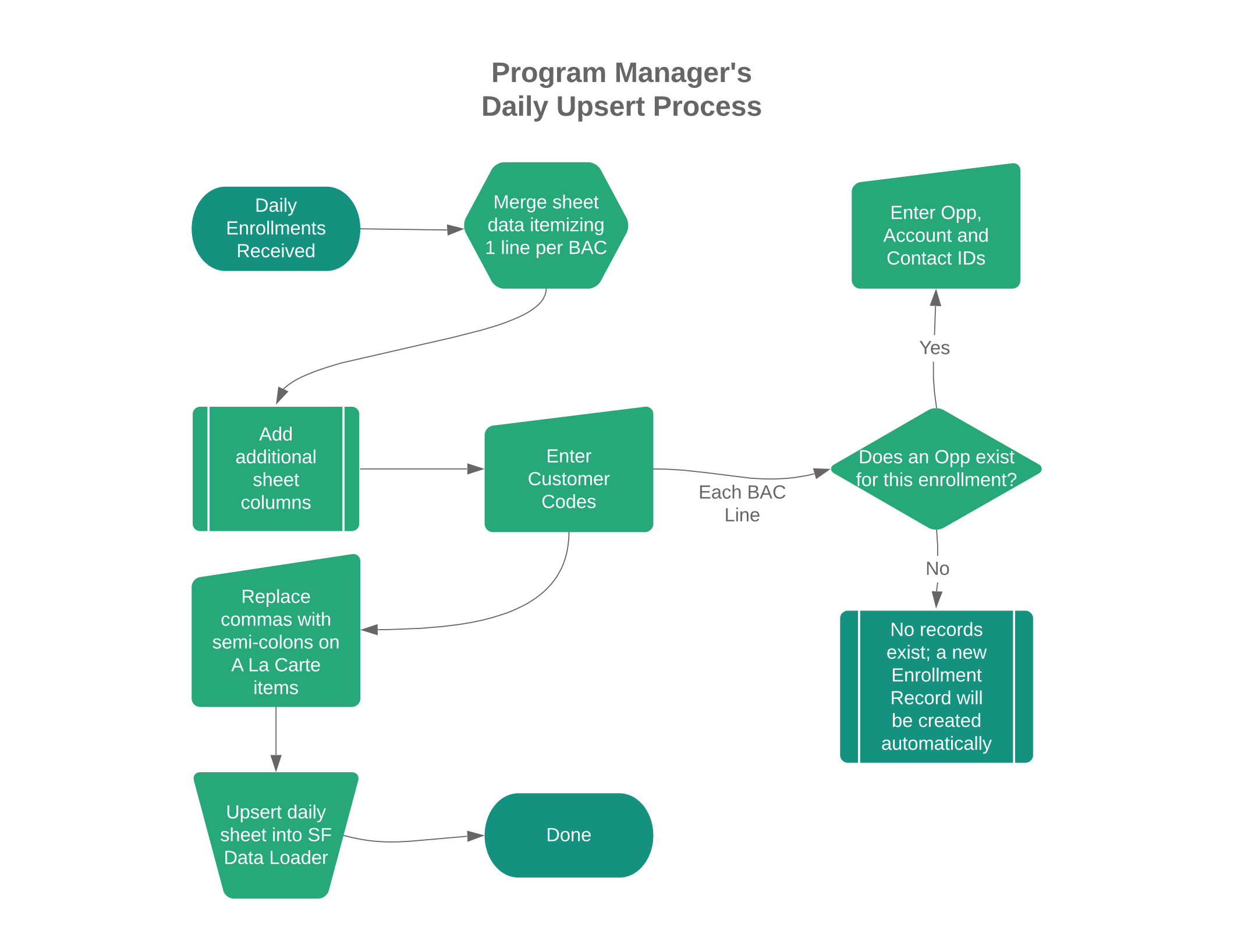 There’s a lot of jargon in the automotive industry, and it’s hard to make sure everyone is on the same page. But when Rich presents team members with an interactive chart with commentary and descriptions, it demystifies the jargon. Rich explains:

“There's really great engagement with these visuals, and you create this common denominator for all of the teams where it doesn't matter what their knowledge or experience is. You're normalizing the playing field right off the bat.”

People are more invested in the project when they can better grasp the meaning behind it, which fosters more positive relationships among teams.

Lucidchart helps Rich communicate with all the different learning styles you find at a given company. He can write out the full documentation for those who want it, such as engineers and developers. But for those who prefer few words and visual representation, everything that needs to be said fits in a single diagram.

Lucidchart has been a game changer for getting up the new General Motors process up and running successfully.

“I don't know how I would've done this without Lucidchart. I guess I could draw shapes with Photoshop or something, but it's just not the same for labeling and fluidity and the arrows and everything. It is just so fast and so easy once you get used to it.  We've never had an operation in our company history where we've created a process that was so sound that only needed to involve four people to handle or mitigate volumes of business.”

Lucidchart filled the documentation gap that too often leads to confusion and miscommunication when trying to establish a new process. These visuals have become the Bible for the process, and any time questions arise, the response is simple: Let’s just go look at what the chart says.

Visualize your workflows with Lucidchart today!