Lucidchart is central to Paul’s work of mapping systems and processes and advising business-enhancing changes. Leaving customers and sponsors in awe, Paul’s unique, interactive diagrams are helping him establish a brand for his growing company.

COLLABORATE
Paul shares his in-progress diagrams with clients, sponsors, and external team members, who contribute to and verify his work. This collaboration saves Paul time and helps him foster client trust.
OPTIMIZE
Lucidchart helps Paul uncover and display inefficiencies in his clients’ systems and motivate them to make cost-cutting and time-saving changes.
EDUCATE
With Lucidchart, Paul is able to consolidate many different information types into concise, reader-friendly, informative visuals.
AMAZE
Composed of colorful, overlapping shapes and interactive layers, Paul’s diagrams have amazed audiences and brought new business to his company.

PropelFwd is a small growing company based in Jersey, UK, that works with clients in the public and private sectors to make their processes more efficient and effective. Centered on giving back to the community, PropelFwd provides quality work for an affordable price.

In Jersey, a small island that is part of the British Isles and rests about 14 miles off of the west coast of France, a retired police sergeant is using Lucidchart to change how the island’s government operates by mapping processes and departments in a creative, interactive way. Meet Paul Byrne, founder of PropelFwd, a small growing company that works with clients in the public and private sector to make their processes more efficient and effective.

During his 22-year career in the States of Jersey Police, Paul became skilled at reviewing systems and devising time-saving and cost-cutting changes. That experience paid off when he was asked to map the criminal justice system in Jersey. Paul’s Lucidchart creation (shown below, right-click to expand image), which he presented to the Criminal Justice Transformation Team of Jersey, displays the criminal justice system in its entirety and exposes many of the system’s inefficiencies.

Mapping out the criminal justice system

Instead of using the standard boxes for process diagramming, Paul used Venn diagram shapes to represent the components of the Jersey criminal justice process, grouping them into color-coded clusters to signify all the stages from before a crime is committed to after a sentence is delivered. 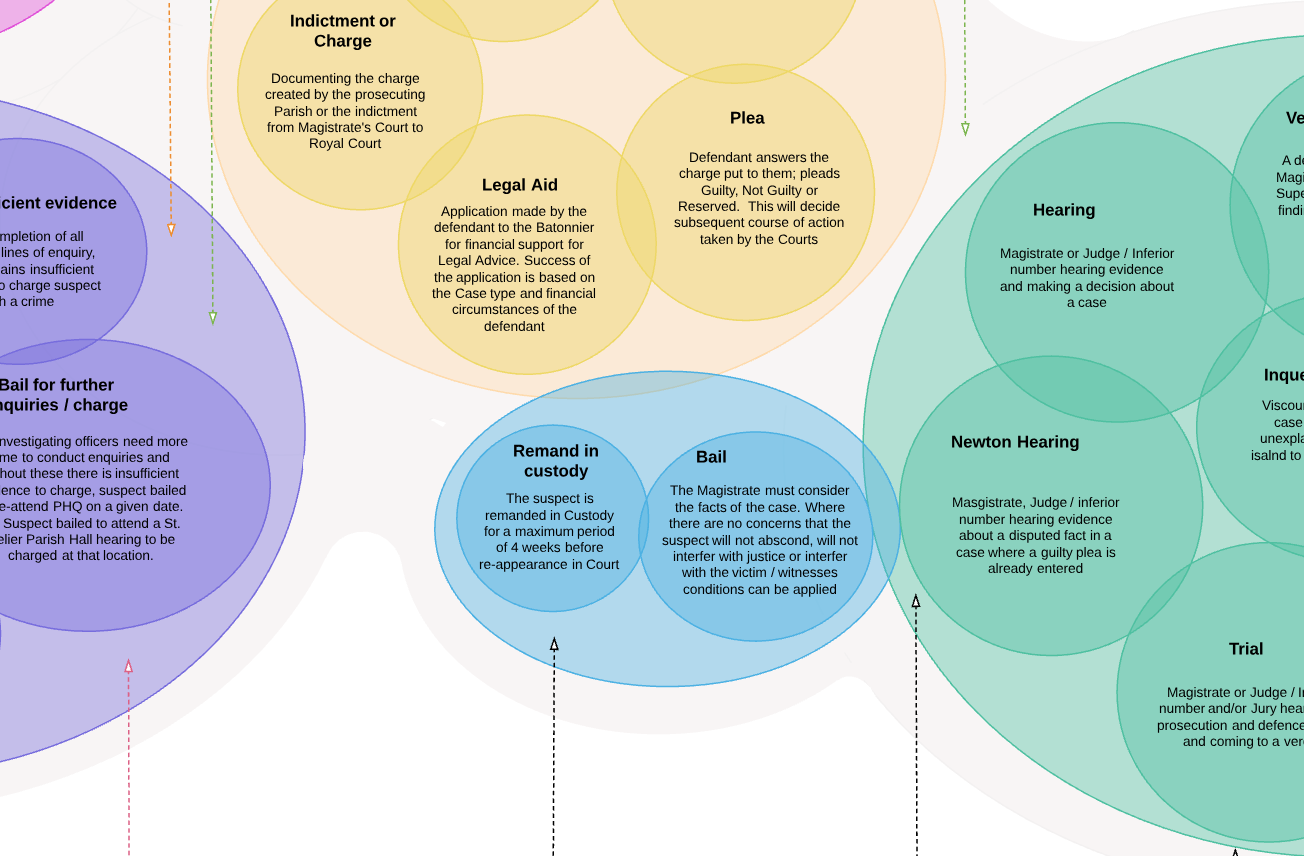 Paul surrounded the clusters with an amoeba-like grey entity to convey the connectedness of the process’s components. He explains:

“We didn’t want to lose sight of the fact that everything is connected and everything will have an impact on the next stage and even two or three stages down.”

Displaying everything in one place

Above and below the colorful bubble flowchart, Paul added icons to represent the users who come into play at different stages of the justice system—both the “external users” who receive the system’s services and the “internal users” who carry them out. 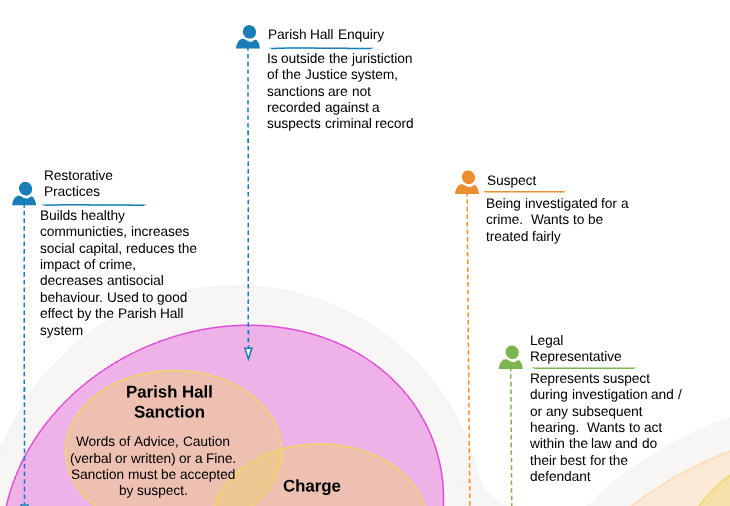 He also added a bar at the bottom of the visual listing the relevant services and prosecuting bodies in Jersey. Another bar below this contains shapes representing the different IT systems that are used to record and store information produced by the criminal justice process.

In its two-dimensional form shown above, Paul’s diagram is a compelling educational resource that brings together and organizes many different kinds of information. But hiding from this view is a spectacular interactive element that Paul created using Lucidchart’s hotspots and layers features.

Paul’s document is made up of 33 distinct layers, each one containing lines to represent all of the connections between a specific IT system and the parts of the criminal justice process from which it draws information. Paul used hotspots to link each layer to one of the shapes in the grey bar so that when someone clicks on one of the shapes when viewing a published version of the document, the lines of the associated layer will shoot up from the shape to the diagram above.

When they enable multiple layers at once, Paul’s clients can identify instances of resource overlap—that is, moments in the criminal justice process when two IT systems are doing the exact same thing. This insight has great cost-cutting implications for the Jersey government, which is now analyzing the information that Paul’s map uncovered to consolidate the IT systems and create a more efficient information recording and storage system. 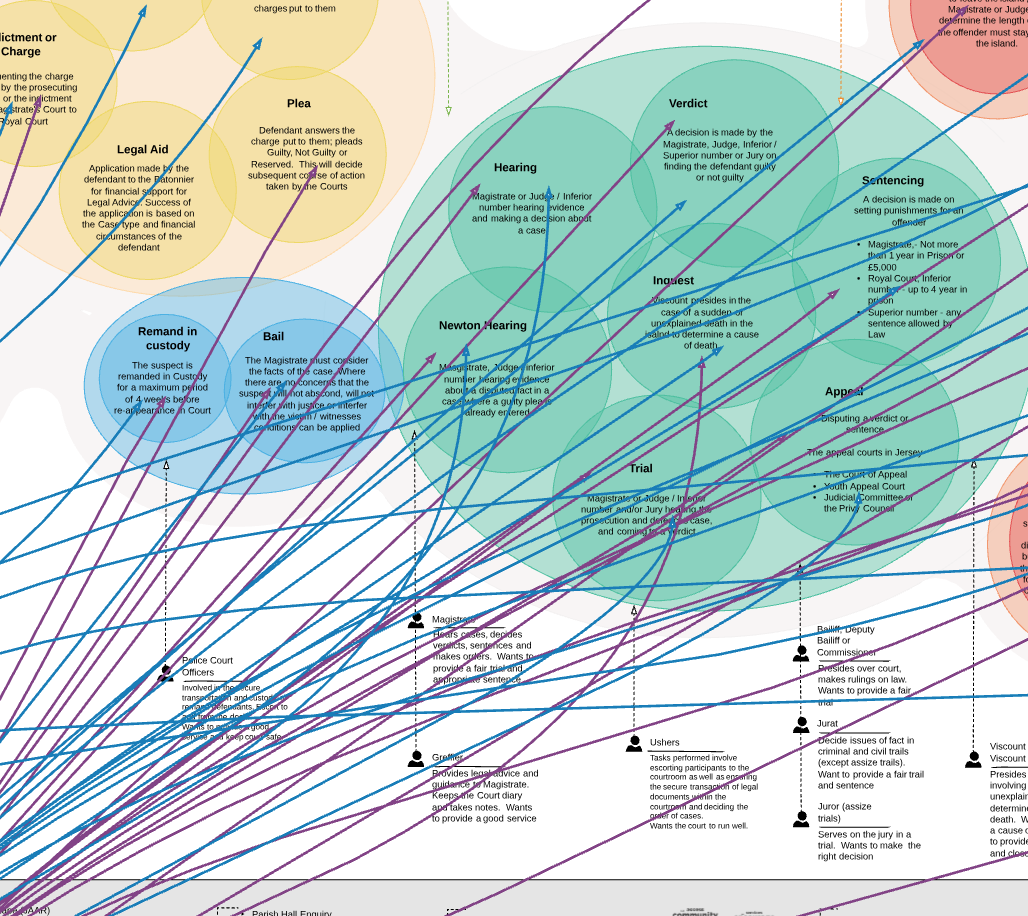 Paul would not have achieved his success had he not dared to challenge expectations. His decision to use Lucidchart was deliberately venturous. He reflects:

“When I was setting my business up, I didn't want to go down the route of expectation, which was to run out to buy Visio and Microsoft Project, as those products seem to be the standard to use. But I didn't want to be standard in any way, shape, or form.”

While researching alternatives to Visio, Paul was immediately drawn to Lucidchart because of its portability, ease of use, and collaborative capabilities. He loved that he could share his in-progress documents with clients, sponsors, and external team members and that they could see and contribute to them from any browser or device. In addition to saving him time, Lucidchart’s collaboration features helped Paul strengthen his relationship with clients; their ability to peek at his work at any time fed their trust and investment in the project.

What Paul did not foresee when he chose Lucidchart was how its presentation capabilities would captivate audiences and put his company “on the map” for potential clients. Referring to the meetings in which his diagram was shown to audiences that included high-level politicians and business people, Paul reports:

“They were all blown away by the power of Lucidchart. Their responses ranged from ‘amazing’ and ‘jaw dropping’ to ‘what is Lucidchart?’ One meeting included two senior executives from Microsoft who could not believe what they saw and acknowledged that Visio could not do what we have achieved with Lucidchart.”

Paul discloses that some of his customers are so impressed by his work that senior managers at their companies within the States of Jersey are purchasing Lucidchart subscriptions to replace Visio.

After seeing the power of his criminal justice map, the Jersey Government asked Paul to create another, more elaborate visual to depict the journeys of victims and witnesses through specific criminal investigative flows. Paul enthusiastically complied, and in just four weeks, he created the following masterpiece. 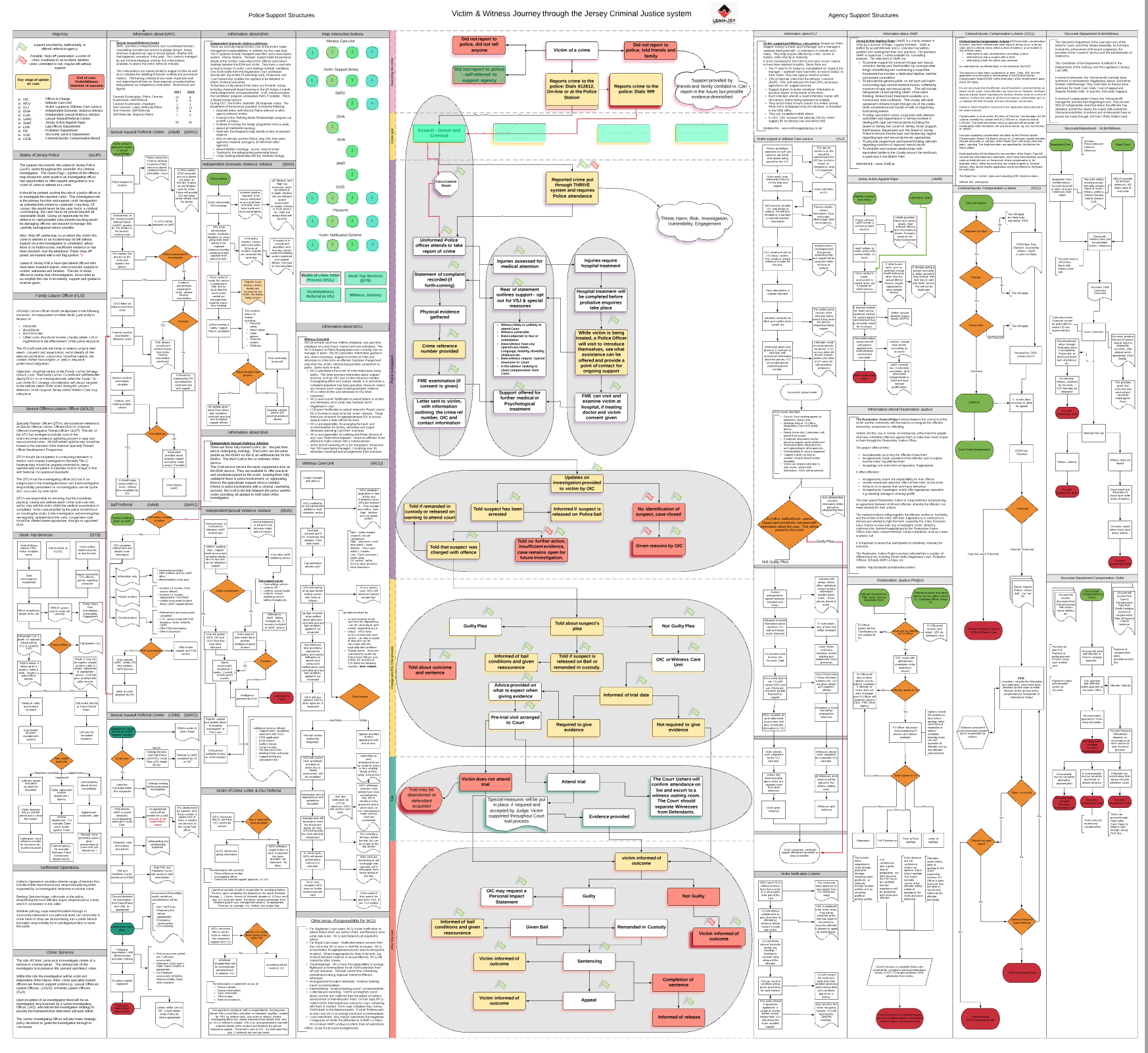 Containing seven pages and 34 layers, the scope and complexity of this map surpasses Paul’s criminal justice diagram. The map consists of three panels, and depending on which type of offense they want to explore, a viewer can toggle on/off a layer that will populate the middle panel with one of four vertical flowcharts. The panels on each side of this flowchart contain summaries and mini flowcharts describing relevant support structures. Additionally, the map contains interactive buttons modeled off of Paul’s first diagram that show where different services come into play in the investigative processes. 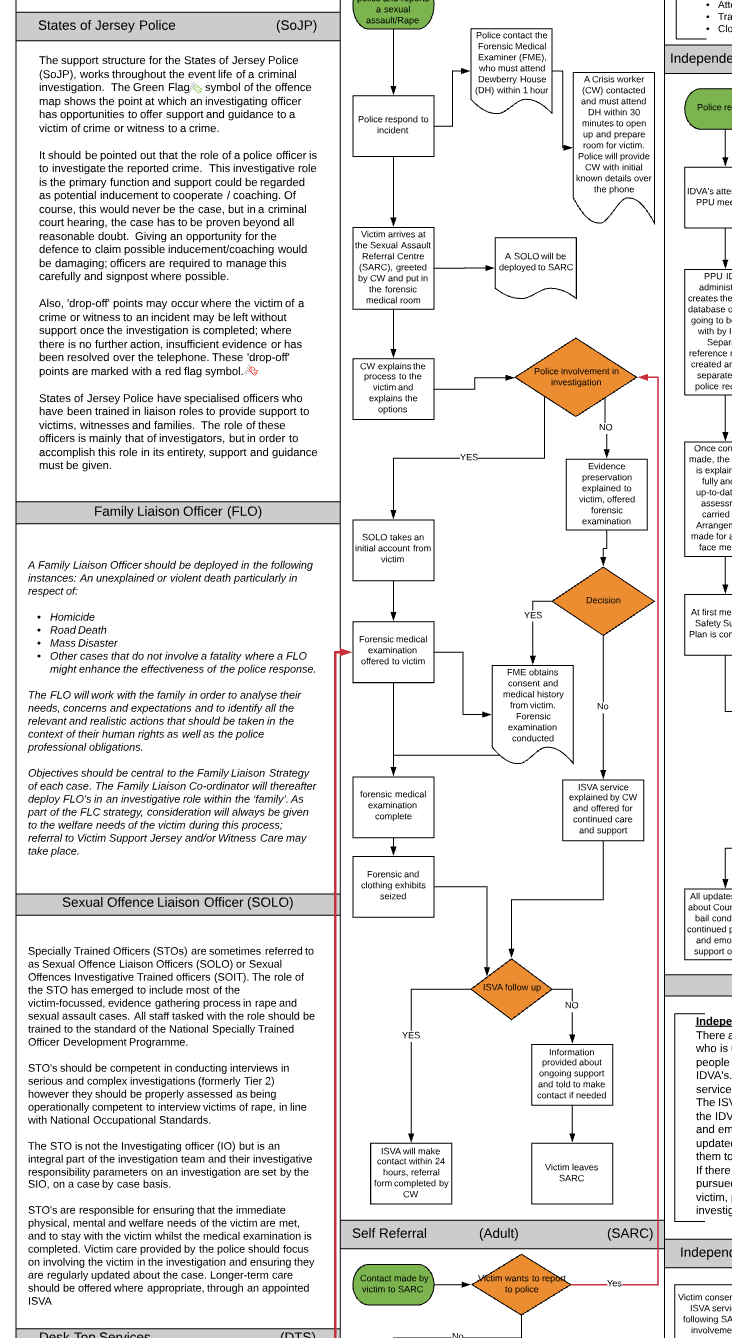 Highlighting both overlaps and gaps within support services, this map will help the Criminal Justice Transformational Team make resourceful changes to their processes and improve the victim’s journey through the court systems. 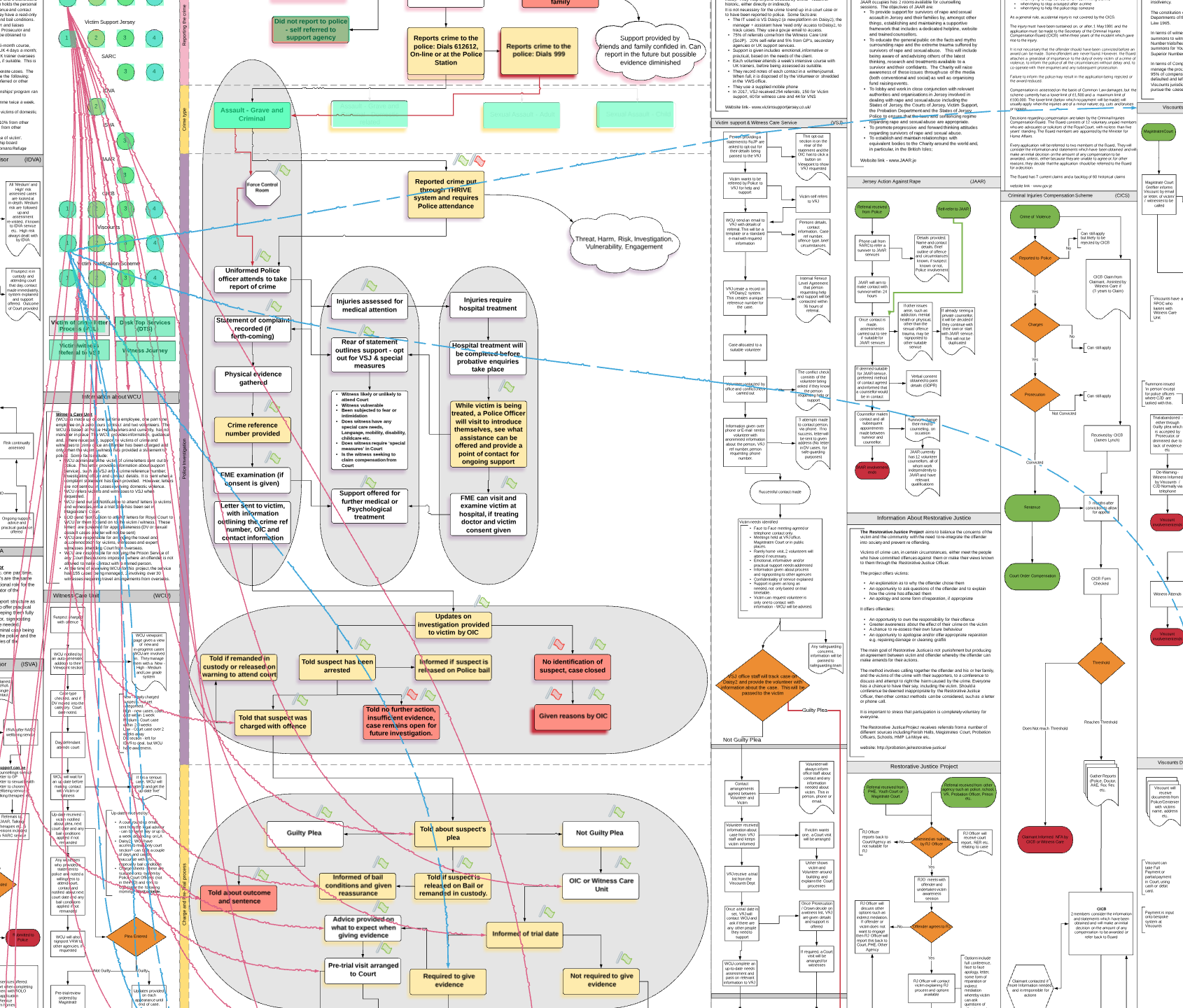 No limits in sight

Deviating from and surpassing standard uses of Lucidchart, Paul’s creations point to the platform’s potential. On the one hand, his diagrams show that one can build in Lucidchart without bounds, both two-dimensionally on the canvas and three-dimensionally with layers.

Furthermore, his unique use of shapes and his departure from traditional diagramming styles exhibit how the platform encourages creativity and newness. Neither Paul’s innovation nor the software show any sign of nearing its limits; as he assists and refines more public sector work, Paul will continue to use Lucidchart to map out systems, processes, and departments in unprecedented ways. Together, Paul and Lucidchart will manifest the power of visualization for cultivating clarity of thought and communication.