Lucidchart launched in 2010 as one of the very first and most impressive graphical applications on the web. Over the course of several years, it has grown organically to include an incredible array of features. However, for many users it has become unwieldy over time, and its complexity can sometimes get in the way of its core value: drawing diagrams more quickly and easily.

Over the last six months, our UX and engineering departments have been hard at work wireframing, prototyping, testing, and finally building a completely redesigned editor for Lucidchart. After some consideration and experimentation, we decided to build our new editor with Angular 2, for several reasons:

This is the first in an ongoing series of blog posts on practical, real-world lessons we’ve learned from building a very large, complex application using Angular 2. In each entry, code samples will be in Javascript rather than Typescript, as Lucidchart is written in Javascript.

In order to guarantee that the DOM always shows the very latest available data, Angular monkey-patches every entry point to running Javascript with a Zone. So any time Javascript finishes executing—meaning an AJAX request completes, a click event handler runs, or a Promise is fulfilled—Angular 2 checks whether any changes have occurred that would affect the DOM.

When the change detector runs on an Angular 2 component or directive, it evaluates every Javascript expression in that component’s view template (or the “host” entry on the @Component or @Directive decorator settings). It then compares the output of each expression to its previous output. If the result of an expression has changed, Angular 2 updates the DOM accordingly.

This is incredibly fast (until it’s not)

When you start a new Angular 2 application, the change detector seems magically fast. The view compiler for Angular 2 produces Javascript VM-friendly code, and is as smart as it can be about rapidly determining if an expression has changed.

As the application grows, things may start to lag a bit. If you have drag & drop in your interface, you may find that you’re no longer getting silky-smooth 60FPS updates as you drag elements around. Eventually you’ll run a profiler on your code to see what’s slow, and you’ll find something that looks like this: 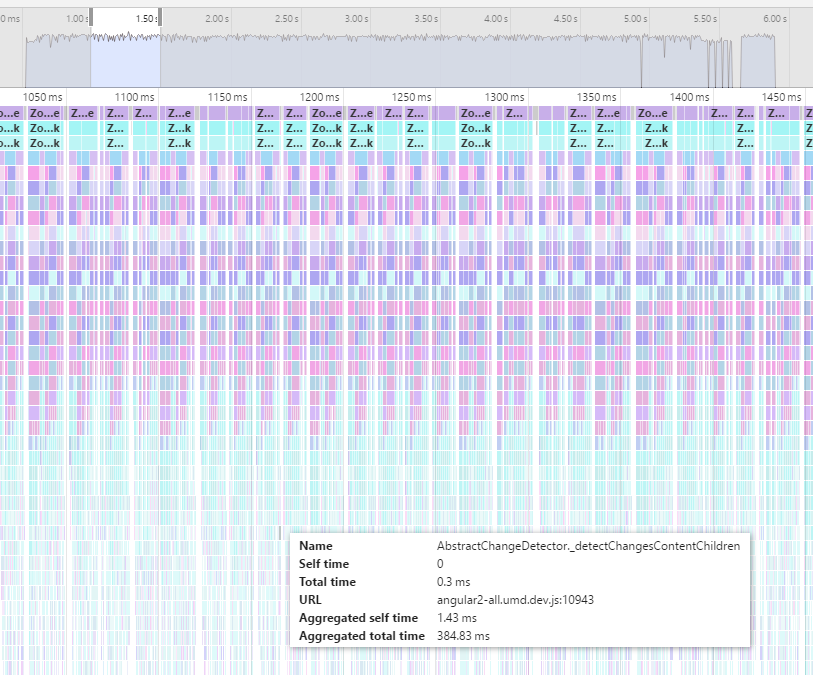 There’s no single function call that’s taking up all your time. Instead, it’s thousands upon thousands of calls inside AbstractChangeDetector. Each is nearly instantaneous, but in aggregate they are crushingly slow.

But almost nothing is changing!

Why should the change detector be chewing up so much CPU when almost nothing is changing from one Javascript execution to the next? Well, you the programmer know that almost nothing has changed, but Angular 2 needs to empirically determine that each and every time, for every single piece of updateable DOM in your application. For a very detailed explanation of what’s going on, I recommend this excellent Thoughtram post.

At this point, there are three things you can do, and you should do all of them:

By default, the change detection strategy on any component or directive is CheckAlways. There is another strategy, OnPush, which can be much more efficient if you build your application carefully.

OnPush means that the change detector will only run on a component or directive if one of the following occurs:

There are two ways to prepare a component or directive for OnPush: Using immutable inputs, or using observable inputs.

Method 1: Only use immutable inputs

The simplest way to make OnPush work perfectly is to use immutable objects throughout a component. If you change an object you are passing to a component, don’t change its properties in place; rather, construct a copy with the change applied. That way Angular 2 can see you’ve changed an input and adjust your DOM accordingly.

Method 2: Only use observable inputs and injectables

If you can reliably listen for when your data changes, then you can manage when the change detector runs yourself. It doesn’t matter if you’re using something like RxJS’s Observables, or if you roll your own change management system, as long as you are notified every time your data changes.

As a simple example, consider a simple indicator of a user’s name and portrait. You want to keep the indicator up to date, but changes can come from elsewhere in the application or even from another browser tab. But you’ve implemented your own onChanges method on your injectable User that calls a callback whenever your data changes. So your component could look like this:

Alternatively, if the user is passed into the component as a property, it might look like this:

Here, we have to watch for changes with the ngOnChanges lifecycle hook, and unbind and rebind changes appropriately.

Now, I don’t want to recommend that you roll your own change event or observable system. But these examples hopefully make it clear that you don’t have to use any particular library in order to take advantage of Angular 2’s OnPush change detection strategy.

This can bite you in subtle ways. For example, you may check that each child component each is using OnPush, but forget that you’re using a Directive that does not. Getting this right is not complex, but it does require complete thoroughness.

As you work to make your applications faster, using Angular 2 or otherwise, always use profiling tools to decide where to optimize. If your profiler output is dominated by a function that is rarely called but operates too slowly, optimizing the change detector won’t help much.

If your profiler output looks like ours did (in the image earlier in this post), use the “Heavy (Bottom-Up)” view and sort by total time. Then scan down the list until you find the first few methods from your application. Make them faster. And when they’re pretty fast, but still taking up too much time, that’s when you want to improve your change detector patterns.