If a hurricane strikes, knocking out the power across an entire region, Informatica can see exactly which region, city, and building their services will fail to, and can be up and running again in 15 minutes. In some cases, they even plan ahead and move services even before they are affected. For the cloud trust team at Informatica, a software company for enterprise cloud data management, Lucidscale is their ticket to thorough network visibility and top-tier cloud governance.

Toby Foss, director of cloud network operations at Informatica, oversees their CloudTrust team, which is essentially a cloud services IT department.

Comprised of multiple specialized teams who keep Azure, GCP, and AWS up and running for Informatica and their customers, the 200+ person CloudTrust team is responsible for:

Read on to see how Lucidscale plays a key role in keeping their organization moving forward.

Toby says, “It’s essential that everyone has up-to-date visibility into the networks.” He was initially hired to tackle the lack of organization around networking at Informatica. “There were no architecture-level diagrams when I first started... They told me, ‘your very first task while you're learning this network is documenting,” says Toby. “I was able to jump right in, using Lucidscale as a great starting point.”

Informatica leveraged Lucidscale for network visualization—a powerful way to simply explain the details of a complicated system, giving a bird’s-eye view of where certain elements live, why they matter, and how they can affect other systems and processes downstream.

As they were making changes, Toby used—and still uses—Lucidscale to auto-generate AWS diagrams, forming colorized groups of Points of Delivery (PODs), visualizing which POD belongs to which Informatica product. “It's a good overview,” says Toby. “I don't have to manually go in and play with these [diagrams] too much—I do an import and set them up once. [Lucidscale] works for what we need it for. I'm actually quite thankful for it,” because for each single POD and backup POD, there about 400 VPCs, and each VPC can have 30-40 subnets.

By visualizing current systems, Toby says that his team is “able to replace static drawings with what's really out there in the world, in a meaningful way,” ultimately ensuring they communicate the appropriate recommendations and changes as necessary.

Whether the task to build something new, make changes, or troubleshoot, “communication among teams is one of our biggest challenges,” says Toby. It’s important to track how even the smallest change can significantly impact other departments.

Informatica’s Lucidscale diagrams help keep track of hundreds of changes and facilitate communication by being included at multiple technical touchpoints of the business, including:

Not everyone needs a complex diagram—executives don’t really care to dig into Terraform scripting, subnets, and IPs.

Instead, “[executives] just want to see the big picture of what exists and where it is,” says Toby. “In [the network diagrams], you can see subnets with instances, but I can reference them to show the flow of data, where traffic is going, and what's allowed and not allowed,” says Toby. 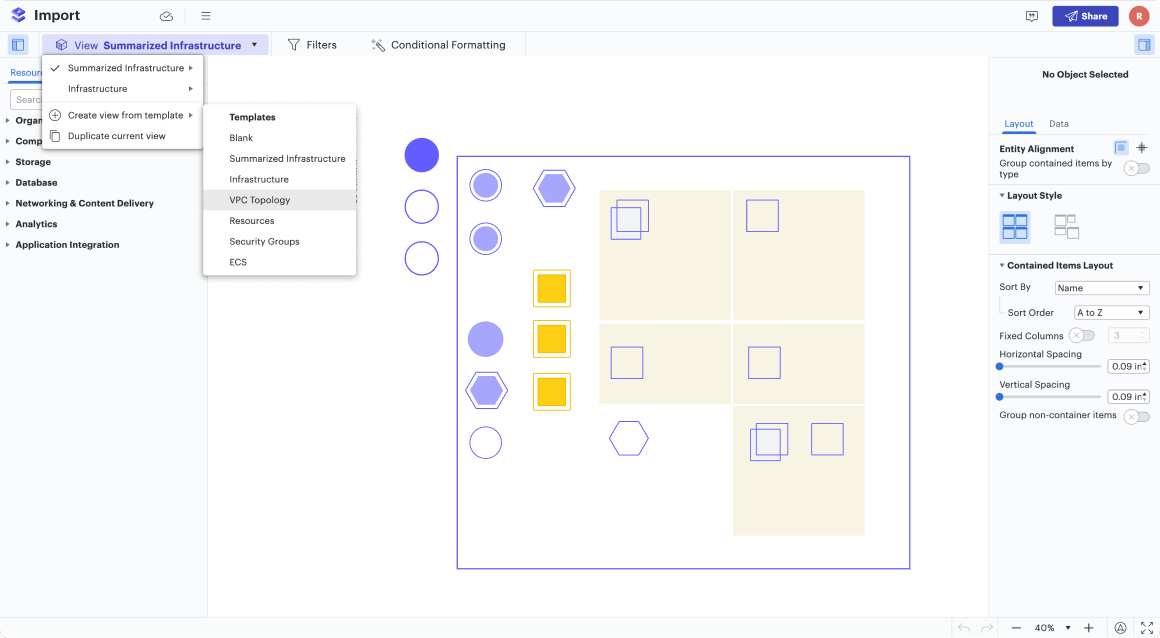 For the more technical implementation teams, these diagrams are essential. Diagrams are included in standard documentation using the Lucidscale Jira and Confluence integrations so everyone knows what current project setups look like. Any change, such as a new server or new service, “automatically updates the diagram on the Confluence pages because it’s tied to the original document, so I always know that I'm looking at the latest and greatest diagram,” says Toby.

Toby explains that “At Informatica, the architects design and the developers develop code. And getting both on the same page is always a challenge—Lucidscale gives us a great resource between them.”

Their architecture diagrams and wiki pages are a resource for developers who actually write the script, so it’s clear what they need to build. “I will include a diagram that is tied directly back to Lucidscale, a spreadsheet of IP addresses, ranges or subnets, and names, and then the developer will go make the Terraform script based on the picture and the Excel spreadsheets to do the function,” says Toby.

While their diagrams are embedded in regular and anticipated workflows, they are especially used during outages and downtime.

When accurately and constantly kept up to date, network diagrams are a single source of truth to reference and explain when an issue arises. These diagrams help the teams understand and determine:

“Our diagrams are a visual aid to help explain how traffic is routing or flowing. They get really technical with IP addresses and such, but for someone that doesn't understand that part, I can give them details of, ‘Hey, when you send traffic out and it gets killed here, we know that's where the problem is.’”

Diagrams of individual components are rarely ever stand-alone, but are instead part of an ever changing dynamic ecosystem that all works together.

So, in the case that there is an issue with GCP or Amazon specifically, Toby says, “I would take this network drawing and attach it to a ticket to show what I'm seeing—saying to take notice of a red X, because that’s where the problem is," essentially helping other vendors troubleshoot, too. “In some cases we even email the diagram to one support engineer, work in-real time with another, or send it to another team to add info where it’s needed.” 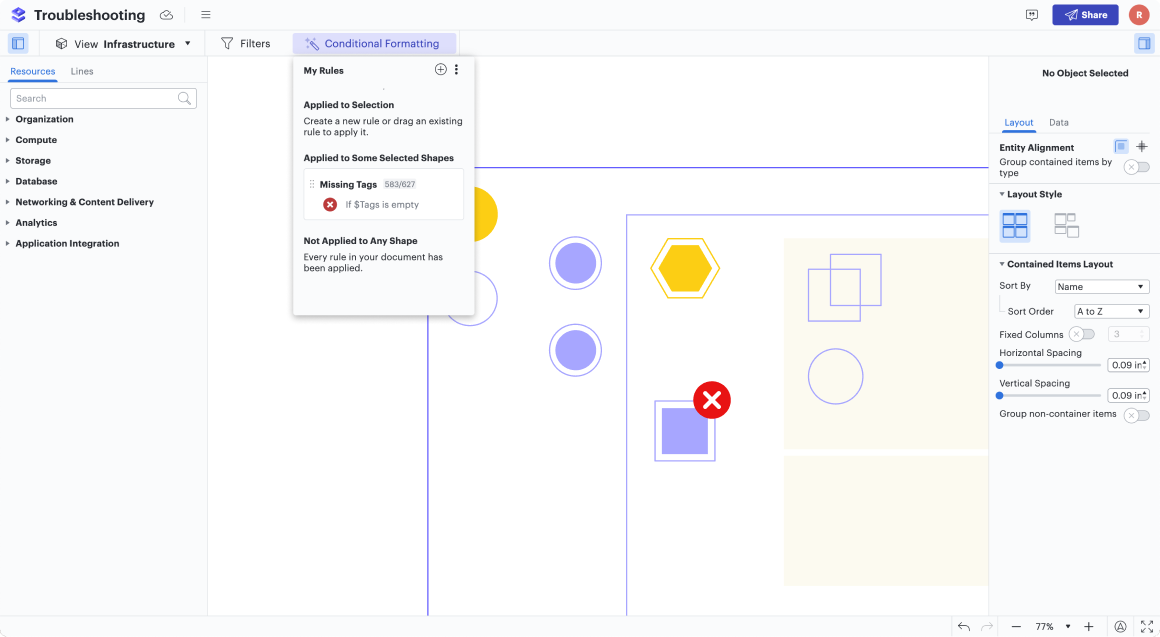 Network visualization also helps paint a clear picture of what happens if a primary site were to fail. Toby’s team built a management plane in Lucidscale, which documents all products and their associated services, noting where customer data sits. “But, it's one thing to document for posterity’s sake, but it's another thing to actually use it during a P1,” says Toby.

But, when that does happen, “I can pull up a diagram and actually show what’s happening during a P1 case where there’s an outage and customers are hurting and nobody can figure out what's going on,” says Toby.

“If there was an outage between any shift change, you could lose an hour or two while one team is sun setting and another team's coming up. That's basically a third of the day gone between shifting time zones and a getting a new person up to speed… we use these diagrams to show what we've already done and what we have yet to figure out,” says Toby.

Lucidscale is a valuable compliance asset, whether used reactively or proactively. Architecture diagrams can be given to auditors as evidence to prove compliance, and they can even be used as a regular internal compliance checklist.

One of the biggest deliverables for FedRAMP compliance is a System Security Plan (SSP). “It's an inch-thick Bible of everything you're doing to meet compliance,” says Toby. The team has to include:

“One of the things that we do for FedRAMP is include architecture drawings and architecture models. They're not very technical detailed, but they're informative,” with each required document requiring a different level of detail. 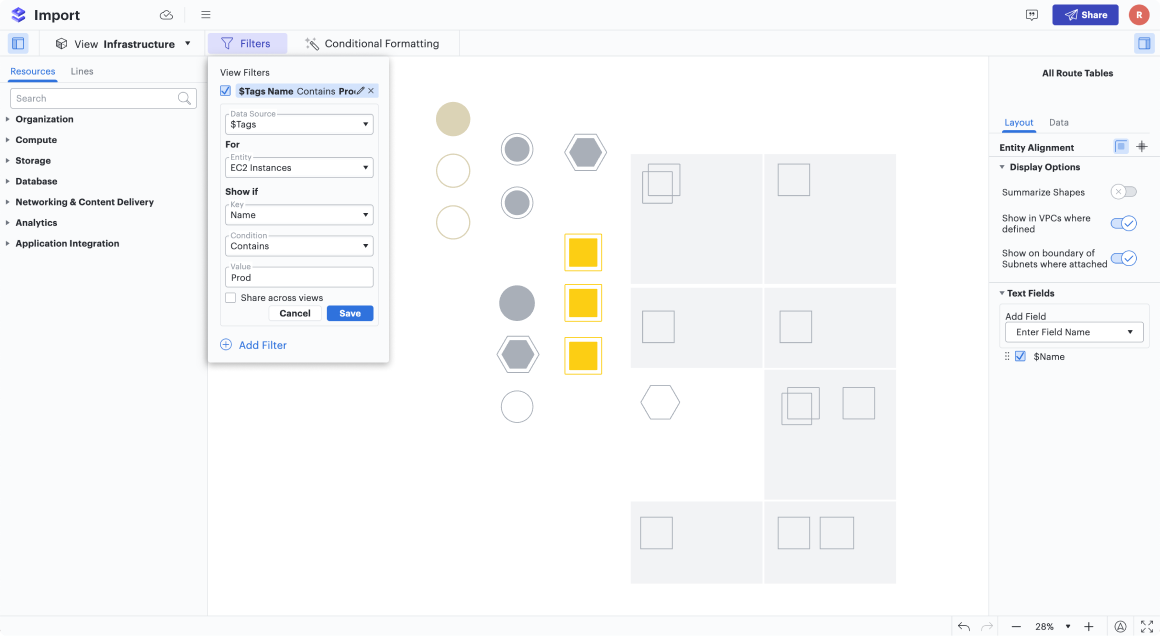 For example, Toby states, “In one section, you might need to refer to the security of a particular aspect of your service, so you need a really detailed document. And then at another section an executive overview to give to senior officials at the U.S. government. And they don't care about the details—they want a simple, flow diagram and a simple explanation of how the system's going to work.” In Lucidscale, you can create both and include them in an audit.

“The idea is that we keep one set of documents and then each of these different compliance models, whether it's FedRAMP, ISO, SOC 2, HIPAA, or whatever, include the same architecture drawings, so we’re not maintaining separate documents.”

Maintaining architecture documents in a central location ensures compliance isn’t a point of friction or concern, but a formality that simply requires inserting diagrams that simply and clearly outline compliance.

From layered and auto-generated AWS diagrams to high-level executive flowcharts, Informatica continues to benefit from Lucidscale. They’re all about efficiency—quickly recovering from outages, streamlining handoffs, easily proving compliance, and clearly communicating with both technical and non-technical users. Lucidscale is just the piece that glues it all together.