At the beginning of this year, Lucidchart rebuilt its editor in Angular 2. The new editor delivered a better experience with far fewer lines of code. Both engineers and product managers enjoyed it because it made writing features easier.

But, there was a big problem: load times. The Angular 2 version consistently took several seconds longer to load than the non-Angular version. Over the summer, we worked with the Angular team to improve our load times. The end result of these efforts is that our new editor loads five seconds faster than it did before and one second faster than our old editor. We even created a 29KB Hello World Angular 2 app along the way.

When we released the beta of the Angular 2 version of our editor, we consistently saw load times about four seconds slower than our old editor.

Load times for our old editor (purple) vs our new editor (blue) for the week of July 10th.

While analyzing our load times, we found that a large amount of time was being spent bootstrapping the Angular app with the runtime template compiler. We saw mentions of an offline compiler, but it did not appear to be available or documented yet. In an attempt to improve our load times, we reached out to the Angular team in March about Ahead of Time (AoT) compilation.

They kept us up to date on the progress of the AoT compiler and informed us that it only worked with TypeScript. Problem was, we were using the JavaScript version of Angular 2 in concert with the Google Closure Compiler to typecheck and minify our JavaScript.

When we mentioned to the Angular team our inability to use TypeScript due to the Closure Compiler, they suggested two tools they built at Google to solve this same problem: Tsickle and Clutz.

At Lucid, we modified Angular 2, its dependencies, and the AoT compiler in order to produce Closure compatible JavaScript from Angular 2 TypeScript. The end result is a five second improvement in load time for our new editor.

The above figure shows load times from May to September for our old editor (purple) and our new editor (blue). We switched from JavaScript to TypeScript with simple optimizations from the Closure compiler in the middle of August, which is when we see the first dip in load times. The second dip comes at the end of August, when we got Closure’s advanced optimizations working with TypeScript.

Load times for our old editor (purple) vs our new editor (blue) for the week of Aug 29th.

When we compare flame graphs collected while loading our new editor with AoT and runtime compilation, we see a large difference. The biggest difference is, as expected, between the Angular 2 bootstrap and the first Angular 2 tick. The ahead of time compiler cuts out a large amount of template parsing and compilation that otherwise happens at runtime. Accordingly, things are much faster. Fair warning, the scales on these graphs are not equal. 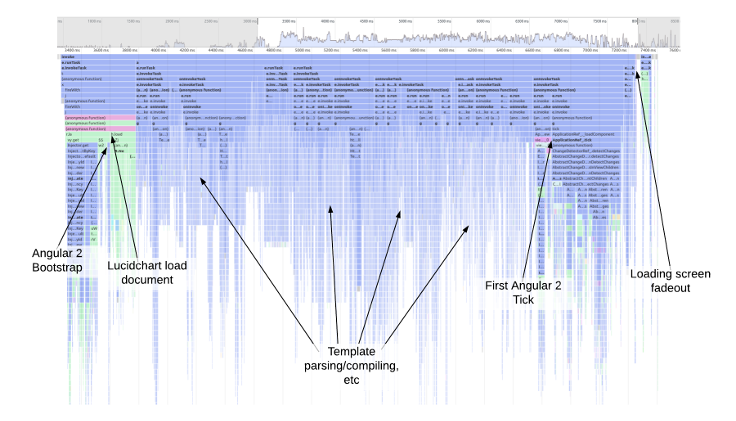 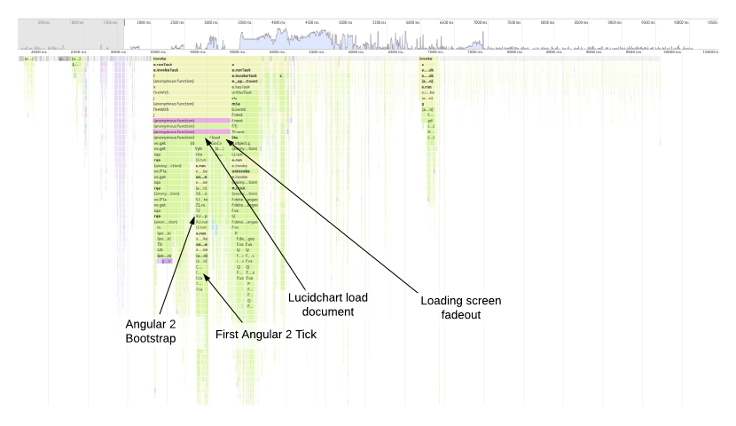 How We Did It

In this section and the next, we discuss what we did to make this happen and provide an example, in case you would like to reproduce our efforts.

For those who want to skip straight to the example, you can find it here: https://github.com/lucidsoftware/closure-typescript-example

You can use Tsickle to create TypeScript dependencies in your Closure JavaScript codebase.

Clutz is a project from the Angular team that produces TypeScript definition files from Closure compatible Javascript. It uses the Closure Compiler’s API mode and performs a full closure compilation in order to produce a definition file that lets you use all your existing Closure JavaScript in a TypeScript project.

Clutz can be used to turn something like this:

Putting it All Together

In order to support Angular 2 generating Closure compatible JavaScript with AoT compilation, we modified Angular 2 and RxJS. We built a custom version of both projects and currently use them in our build process. If you would like to know more about the modifications we made to get this working, please see this GitHub issue.

Lucid built a proof of concept Hello World Angular 2 application using Tsickle and Clutz before we tried implementing the same thing in our large JavaScript codebase. You can find the example on GitHub at https://github.com/lucidsoftware/closure-typescript-example.

The purpose of the project is to provide an example of Tsickle, Clutz, and Angular 2 working together. Things are built from source, so you can see how we go from modified Angular 2 all the way to the final product. Comments, questions, and pull requests are welcome.

When we compress the resulting bundle using Brotli, the final bundle size is right around 29KB. gzip is not far behind:

How to Run the Example

Note: You will need to make sure you have all the dependencies installed for this to work. It has only been tested on Ubuntu 14.04.