How 4 companies have used Lucidchart to improve their processes

The digital age has shown us that teams need flexible, collaborative tools to do their best work. But when it comes to the intensive work of improving processes, you want to be sure your investments will pay off.

Lucidchart's innovative and intelligent diagramming applications have helped scores of companies identify problems and improve processes. Whether helping a global airline organize workflows for maintenance—or accelerating communication in the lead up to a new product launch from a financial services leader—Lucidchart brings plans to life with visual clarity.

Let’s explore four examples of industry leaders that have used Lucidchart to improve their processes.

The honeymoon period for any new job can often be short-lived, but it was especially so for Steve Groff.

When Groff was hired as Delta Airlines' new process engineer at the Minneapolis maintenance hub, he quickly found that his new position faced some immediate and monumental obstacles. Workflows for airplane maintenance had fallen by the wayside, millions of dollars worth of aircraft parts were sitting unorganized, and an impending relocation to a new maintenance warehouse was creating headaches of its own.

As Groff stepped into his new role, he recognized there was no time to waste.

"It's going to be a big change in attitude," said Groff. "There's going to be push back, but there's really only one way to ensure that a process is being followed, and that's accountability."

Groff turned to Lucidchart to accomplish his many goals: visualize and streamline workflows, create new opportunities to increase efficiency, and save Delta time and money.

With the new process in place, Groff then used Lucidchart to collaborate with his new department on further improvements, recording feedback from co-workers across Delta.

"I can put Lucidchart on a projector in a conference room, listen to feedback, and put the whole process together right there in a matter of 20 minutes,” he said.

The flowcharts resulting from these conferences are printed on what Groff calls "huge murals" and displayed in the warehouse for employees to consult throughout the workday. The seamless integration of Lucidchart's tools has allowed Groff and his team to continue to evolve as new processes present themselves—and have saved Delta hundreds of thousands of dollars along the way.

"For me, Lucidchart is just invaluable," Groff said.

With over 2,000 employees spread across Seattle, San Francisco, and Chicago, DocuSign's management team searched for a way to adapt their quarterly incremental planning system to allow collaboration—regardless of team member location.

DocuSign traditionally implemented a hands-on approach consisting of an in-person team of 30–40 people interacting with a giant board hung on a wall; teammates scrawled various stories, ideas, and brainstorms on Post-it notes, sticking them to the wall with red yarn linking dependencies. For a fast-rising tech company servicing over 100 million users, the need for a more innovative approach was apparent.

"We would be in there all day, overwhelmed by this giant poster chart and simply trying to keep everyone sane until the end of the day," said Senior Program Manager Kunal Arora.

Drawing on Lucidchart's robust suite of tools, Zagofsky and her team transformed their intensive, in-person meeting into a two-day, remote collaborative process. The new process begins with creating a Lucidchart document that contains all teams and sprint dates. Over the following two days, team members brainstorm and add their individual deliverables to the shared document.

The new process has been a massive success for the team. Feedback and adjustments are made in real-time in the document, rather than emailing or Slacking back and forth.

"[Lucidchart] helps us make adjustments to those commitments on the fly, as we have the flexibility to revise as needed," said Kunal. "Lucidchart is working wonders for us."

In addition to being something of a diagram master, Service Delivery Manager Arun Somadathan also leads a wide-ranging team that touches nearly all interactions with customers post-sale at Hitachi (a B2B service that uses data-managed solutions to help businesses improve customer experience and identify potential new revenue streams).

From the Hitachi employees who take customer calls and diagnose issues, to the group identifying warranty levels, to co-workers implementing solutions, Somadathan's team needs complete transparency and outlines detailing steps for each subprocess in order to succeed.

Initially, Arun used a desktop diagramming application to map every point of the process for his team. However, the need to constantly update instructions and information (which required Somadathan to redesign, download, and distribute his diagram every time a change was made) quickly became a costly waste of time and an understandably annoying process.

By transitioning this complicated procedure to Lucidchart, Somadathan's intensive diagrams are automatically saved, and the most up-to-date version is instantly accessible to any team member.

"I don't have to worry about making sure that somebody is viewing the latest updates because they always have these links, so they will see the latest version," said Somadathan.

Plus, Lucidchart's layouts are easier for his team to navigate. "It's an interactive map with the same functionality that our previous diagramming solution had, but it looks more elegant in Lucidchart. Lucidchart cuts it down to just what you need."

Much like Somadathan, Western Union's go-to-market manager Alberto relies on intricate diagrams to outline processes and responsibilities for his teams. In preparing for the launch of new products and updates to existing ones, Alberto uses his diagrams to align involved parties and easily explain practices at all points in the process.

But, when the company told Alberto that they would be transitioning from Microsoft Visio (an application Alberto had come to master and depend on) to Lucidchart, he was initially frustrated. Learning a new system and creating all his diagrams from scratch was not exactly something Alberto was looking forward to.

But as he began exploring Lucidchart's capabilities, Alberto soon found that not only could he recreate his process diagrams quickly, he was able to build them in less time than it took originally.

Lucidchart's collaboration tools were also a marked improvement from the system Alberto had previously been using. The commenting feature has been a specific boon for Alberto and his team, as it allows employees to converse and resolve issues without ever leaving the diagram.

"I love that you have the option to invite others to participate in the same diagram," said Alberto. "The collaboration feature saves our company a great deal of time. With Visio, we were constantly emailing diagrams back and forth...now we are more efficient in time and communication."

And once a diagram is completed, Alberto can easily export his work and email it to his senior management team to quickly gain approval and launch his plan into action. "[Lucidchart] helps us solve our problems and finish our diagrams faster."

These four instances are just a small selection of the many cases showing how Lucidchart can propel your business forward. 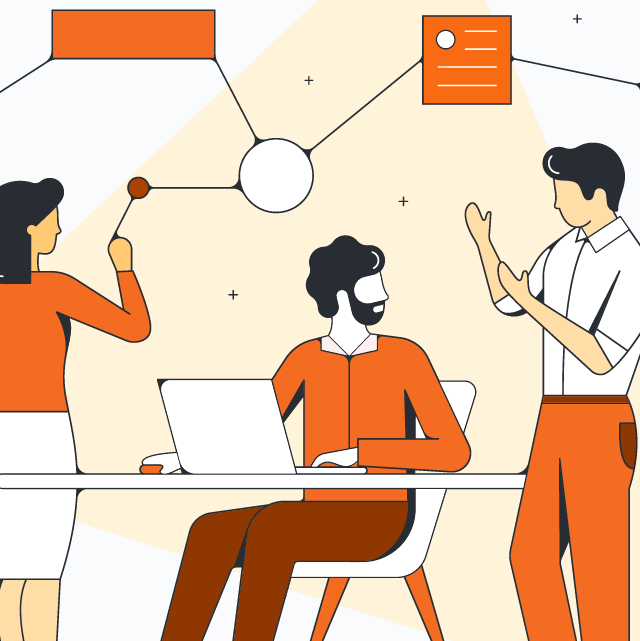 See how Lucidchart can help you collaborate and create with clarity.

See how Lucidchart can help you collaborate and create with clarity.

A single source of truth: Why you need one for team processes