What does scalability mean for systems and services?

A scalable system is one that can handle rapid changes to workloads and user demands. Scalability is the measure of how well that system responds to changes by adding or removing resources to meet demands. The architecture is the hardware, software, technology and best practices used to build the networks, applications, processes, and services that make up your entire system.

Your system, which includes the architecture, services, products, and everything that defines your brand is considered scalable when:

The idea is to build a system that can adjust capacity to meet constantly changing demand. The system needs to be highly accessible, and it needs to be available to all of your customers whenever and wherever they need it.

For example, a well-designed, scalable website will function just as well whether one or thousands of users concurrently access it. There should not be any perceptible decrease in functionality as more users log on.

What is a scalability pattern?

Have you ever played with LEGO® bricks? Maybe you tried to build a structure without following the instructions only to have it collapse? But when you followed the meticulously illustrated instructions, you ended up with a solid structure that would collapse only if you deliberately pulled the bricks apart. The building techniques shown in the instructions have been tested and proven to be solutions to common structural problems encountered by many builders.

But this does not mean that every scalability pattern will work for you. Your challenge is to select appropriate patterns and tailor them to solve problems that are unique to your system. Scalability patterns save you time because a lot of the work has been done for you.

What are some common scalability patterns?

There are several scalable architecture patterns to choose from. Here we’ll discuss some of the more common patterns used to solve architectural scaling problems.

This is a three dimensional model that defines three approaches to scaling along the X, Y, and Z axes.

The X-axis describes scaling through multiple instances of the same component. You do this by cloning or replicating a service, application, or a set of data behind a load balancer. So if you have N clones of an application running, each instance handles 1/N of the load.

X-axis scaling patterns are easy to implement and increase transaction scalability. But, they can be costly to maintain as entire data sets are replicated across multiple servers and data caches grow exponentially.

Scaling on the Y-axis is defined by the splitting or segmentation of dissimilar components into multiple macro or micro services along verb or noun boundaries. For example, a verb-based segment might define a service such as checkout. A noun-based segment might describe the shopping cart.

Each service can be scaled independently, which allows you to apply more resources only to the services that currently need them. To ensure high availability, each service should have its own, non-shared data set.

The non-shared data sets help you to achieve fault isolation so you can quickly and easily diagnose and fix problems without scanning the whole system. But the Y-axis takes a long time to set up and is not very easy to implement.

While the Y-axis splits up dissimilar components, the Z-axis is used to address the segmentation of similar components in your system. Each server runs an identical copy of the code but only for a subset (or shard) of that data.

A common use of a Z-axis split is customer by geographic location or customer by type. For example, paying customers on a subscription news site might have unlimited, 24/7 access to all site content. Non-paying customers of the same site have access to this same data, but they might be limited to opening and reading only three or four articles per month.

This setup can reduce operational costs because the data segments are smaller and require fewer storage resources. But, Z-axis takes a lot of time to design and implement and requires a lot of automation to reduce system overhead.

Vertical scaling is when you increase the capability of a component, such as a server, to improve its performance. For example, as more traffic hits your server, it’s performance will decrease. Adding more RAM and storage drives increases the server’s performance so it can more easily handle increased traffic.

Vertical scaling is easy to implement, saves money because you are not buying new resources, and easy to maintain. But, they can be a single point of failure that could result in significant downtime.

A company just starting out might use vertical scaling to help to keep cost down. But the vertical approach will eventually reach RAM and storage limits and you will need to add more resources to keep up with demand.

Horizontal scaling is when you increase performance capacity by adding more of the same type of resources to your system. For example, instead of increasing one server’s capacity to improve its performance, you add more servers to the system. A load balancer helps to distribute the workload to different servers depending on their availability. This increases the overall performance of the system.

More computing resources means more fault tolerance and fewer risks of downtime. But, adding servers and load balancers can be expensive. You should consider using a combination of on-premise resources and cloud resources to handle increased traffic.

Load balancers efficiently distribute user requests and workloads across a group of backend servers. The idea is to balance the work among various resources so that no single resource is overloaded. Load balancing helps your IT department to ensure the availability and scalability of your services.

A load balancer’s tasks include:

A CDN is a global network of servers that are used to optimize and speed up access to and distribution of static web properties. Static properties are things such as Javascript, CSS, images, and other media files that don't change very often.

As much as 80% of a website might be made up of static content. For example, the videos available on a streaming service don’t change very often. Some of their videos become very popular and can get millions of hits every day. Offloading that static content to a CDN reduces the load on the original server, enhances the content on a global scale, and moves the data closer to customers making it easily accessible and highly available.

Microservices are essentially a bunch of different little applications that can all work together. Each microservice has its own purpose and responsibility. And several different teams can develop them independently of other microservices. Microservices don’t depend on each other to function, but they do need to be able to communicate with each other.

Microservices are easy to scale because you only need to scale those that currently need it. They can be deployed independently without coordination with various development teams. Microservices work well for web applications, rapid development and deployment, and teams that are spread out across the globe.

Microservices efficiently scale transactions, large data sets, and help you to create fault isolation which keeps your systems highly available. In addition, because large disjointed features can be broken up into smaller services, the complexity of your codebase is reduced.

This is essentially splitting a large database into smaller, more manageable and scalable components. When a database gets bigger, there are more requests and transactions made on it. This slows down the response time on database queries. And it can be very costly to maintain a huge database.

A shard is an individual database partition. To spread the workload, these partitions can exist on and be spread across multiple distributed database servers.

You might want to use sharding when your databases get too big because:

Implementing scalable architecture patterns into your system should help your system be able to maintain its performance while increasing its input load. 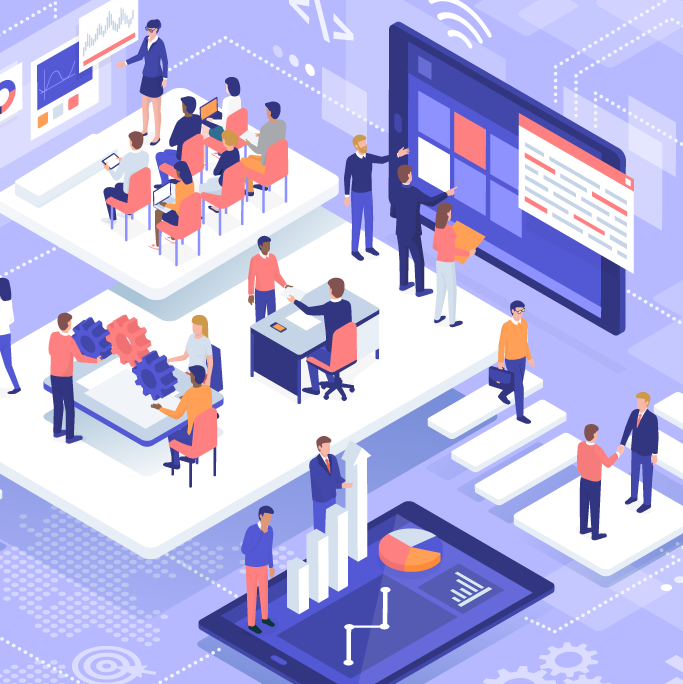 Customize your own application architecture diagram.

Customize your own application architecture diagram.