A guide to Andon in Lean manufacturing

If you’ve ever attempted to fix your car when a mechanical issue arises, you know how complicated a car engine is. Many of us begin with the best of intentions, but then we pop the hood, see what’s beneath, close the hood, and call an auto mechanic.

If a car engine boggles the mind, consider all the thousands of other parts in a car and how each one must be carefully installed, calibrated, and tested. Every single car produced is the result of a complex ballet involving manual and robotic labor that results in a machine that’s safe and reliable. Lean manufacturing keeps this process efficient while minimizing waste.

But even the most choreographed production lines encounter issues. That’s where Andon comes in. Andon is a system that quickly alerts operators about a problem on the line. This immediate alert allows the problem to be addressed on the spot so that the assembly line can return to normal operation.

The Jikoda methodology empowers operators to make decisions in manufacturing without having to wait for managerial approval. The Andon system evolved within Jikoda as a way for operators to keep track of production. With the Andon system, the focus is on locating the root cause of an issue so that a resolution is found as quickly as possible. There are essentially two principles to this system:

The word “andon” comes from the Japanese word for a type of lamp. Toyota adopted the term for its Andon board, a giant sign that hangs on the factory floor and displays the status of each portion of the assembly line.

This visual cue is important because it can be quickly interpreted. It would be easy to ignore an email or notification. With the Andon board, however, issues are instantly communicated and there’s no time wasted waiting for someone to notice a problem.

Here’s how Toyota’s Andon board works. During production, if an issue arises, a worker can pull the Andon cord (which looks something like the “stop request” cord on a bus). The Andon board then lights up for that particular section of the production line, indicating that an issue has arisen and that an operator’s help is needed.

Your Andon board doesn’t need to look like a traffic signal. You may wish to use only two colors (red and green, for instance) or to develop specialized colors that align with your industry. It also may be useful to have an audio cue along with the Andon board to draw additional attention to the cord. Consult with your managerial team to decide which strategy is the best option for your situation.

The Andon cord is great for indicating when a problem has been manually detected, but there are also many sensors that automatically detect issues and that will light up the Andon board to alert workers that something needs to be fixed. If the problem isn’t solved quickly enough, the Andon system will automatically stop the production line until a resolution is found. Andon boards that are triggered automatically are a great asset and can be used to detect issues that workers may have missed in manual detection.

While Toyota utilizes physical Andon cords, the Andon system is also used at web-based companies. Amazon incorporates what it calls the “Customer Service Andon Cord.” Amazon places top priority on customer service, so when a customer service issue arises, an Andon reaction is automatically triggered. This Andon system isn’t a giant board that’s hung over the customer service floor. Instead, it’s a digital system complete with “cords” that are embedded into Amazon’s proprietary interfaces.

At Amazon, the Andon technique is incorporated into a system that proactively scans for occasions when customers have received subpar service. For instance, when a customer had poor video playback on a video rented through Amazon Video On Demand, the system automatically detected the poor video quality and then issued a refund to that customer. Project Managers of the Andon Cord at Amazon are tasked with creating and implementing systems to detect customer-facing defects and to enable internal Amazon teams to quickly fix those defects.

The Andon technique can be incorporated across your business. Andon cords can help with everything from production to marketing. It’s a versatile technique for addressing issues quickly.

If you're ready to apply this system in any aspect of your business, get started with the Andon board example below. With this Lucidchart template, you can link your data and apply Dynamic Shapes so your team members can quickly review the status of production lines.

When Andon is incorporated correctly, it enhances production processes and builds customer trust. There are five specific benefits to the Lean manufacturing Andon technique:

Remember that while Andon was initially invented to help Toyota on their assembly line, the concept and system can be used without a physical Andon board or Andon cord. It’s the ideology behind the system that matters: placing the focus on quickly identifying and resolving issues so that business can get back to normal. 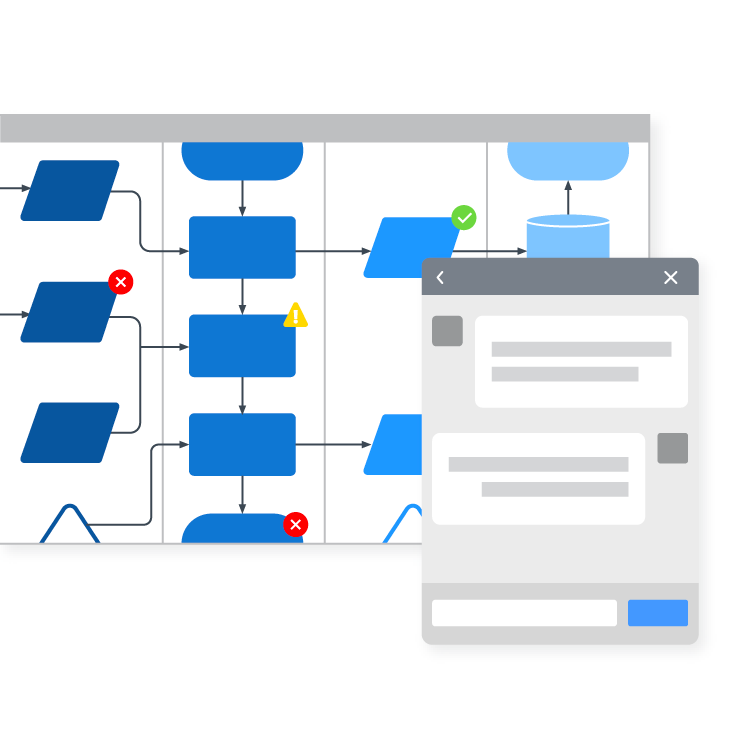