How remote work can be more productive than in-person work

Popular culture loves to make light of remote work. Images of employees sleeping on couches, watching television, or running errands abound. This trope inevitably leads to employers envisioning worst-case scenarios. Without employees in the office, who knows what they’re working on?

But contrary to popular belief, research has shown that remote work can actually increase productivity. One two-year study found that employees who worked from home took shorter breaks, logged longer hours, and found it less distracting than working in an office.

This same study also found that employees who are able to work from home are 50% less likely to look for another job. And it’s not only beneficial to the mental health and productivity of employees: according to data from PGI News, employers save an average of $10,000 per year per employee when their workforce goes remote.

Benefits of a remote workforce

With remote work becoming not only a reality but a necessity (whether due to a global health crisis or because employees will simply start demanding it), let’s consider how remote work increases workplace productivity.

According to a survey from Airtasker of over one thousand employees, one in four of those surveyed quit a job because of a long commute. Commutes are time-consuming, draining, and over time can result in decreased job satisfaction.

Commute time also adds up. Even eliminating a short commute can result in the equivalent of more days spent working instead of commuting. The Airtasker survey, for example, found that remote workers saved the equivalent of 17 days when they didn’t have to spend time getting to and from work. With the average commute time in the United States netting out at 50 minutes per day, the potential time savings are significant.

Researchers have also found that each extra minute spent commuting results in decreased job and leisure satisfaction. Employees who work from home virtually eliminate this pain point. Instead, without having to sit in traffic or leave at a specific time to catch a train or a bus, many remote employees end up starting work earlier and feeling less stress when they start the day.

One employer fear is that remote employees will spend more time on their personal life and less time on the job. Research shows, however, that this isn’t the case. When employees have the flexibility to begin work earlier and take breaks when they need them, they’re less likely to feel as though they have to take personal days or call in sick. One survey even found that remote workers are 52% less likely to take days off.

The saying “ignorance is bliss” may apply to a lot of situations, but it shouldn’t apply to hiring practices. How many great candidates have you missed out on because you require employees to come into the office five days a week?

Whether you’re trying to find a candidate with specific expertise or you’re creating a new role and want to hire someone who’s comfortable thinking outside of the box, it’s always helpful to have access to a larger talent pool. Allowing remote work allows your team to hire great candidates who may not be local.

While, as with any other business venture, there may be risks involved in hiring a remote workforce, there are ways to mitigate your concerns. Establishing criteria for interviews to get everyone on the same page in terms of what you are looking for in a candidate can help. You may also consider doing a trial period to make sure it’s a good fit for both parties.

Regardless of the process you decide on, you will likely see the number and quality of your candidates increase as you are able to cast a wider net. Having access to a global talent pool will also help increase diversity within your company.

Even managers with the best of intentions can end up micromanaging their team members’ work. When employees are in an office, they can feel increased pressure to make it seem like they’re working, which can have an adverse effect, resulting in less productive output.

Airtasker’s survey found that although remote workers took more frequent breaks, office workers spent more time unproductively at their desks. And even though remote workers reported taking more breaks, on average, they worked 16.8 more days throughout the year compared to office employees who may feel like they were simply showing up for optics.

Much has been written about the pitfalls of the open office plan in which employees have trouble concentrating and feel like they are always on guard. The opposite is true when employees work from home. Without a boss or co-workers monitoring their every move, employees can feel free to work in the way that works best for them.

While roughly 70% of businesses report having an open office plan, a study from researchers at Harvard Business School found that workers were less productive and that the quality of work decreased in open office settings. With nowhere to escape for deep work, employees often have to contend with co-workers talking nearby, sounds from the kitchen, or spontaneous collaboration.

On average, office workers spent more than an hour each day talking about non-work related topics compared to just 29 minutes among remote employees. To help ward off these distractions, employees might wear headphones or become more withdrawn in an attempt to focus—tactics that can be even more distracting in the long run.

While there are certainly benefits to face-to-face communication, research shows that remote work results in fewer distractions as employees design environments that are most conducive to their work styles.

No commute, flexibility, fewer distractions, less micromanagement. It’s no wonder remote workers routinely report being happier in their jobs. In a study of more than one thousand remote workers, Amerisleep found that remote workers were 57% more likely than the average American to be satisfied with their job, and 75% said they planned to work remotely for the rest of their career.

While remote work benefits both employers and employees, it’s still important to create a cohesive sense of community so team members feel supported. Without in-person feedback, remote workers can feel like they’re working in a bubble, waiting for a manager to respond or wondering where they stand in their roles.

By using technology to help create a more connected workforce, employers can mitigate the concerns remote workers might have about feeling left out. You might consider using video meetings for one-one check-ins or setting aside time to connect about non-work activities.

And just because you have a remote workforce doesn’t mean you have to lose out on company traditions like celebrating employee birthdays or important company milestones. Consider making those standard operating procedures either through video meetings or through a communication tool like Slack.

From virtual icebreakers to more structured remote team building activities, consider how you are ensuring that employees feel connected no matter where they are working from. 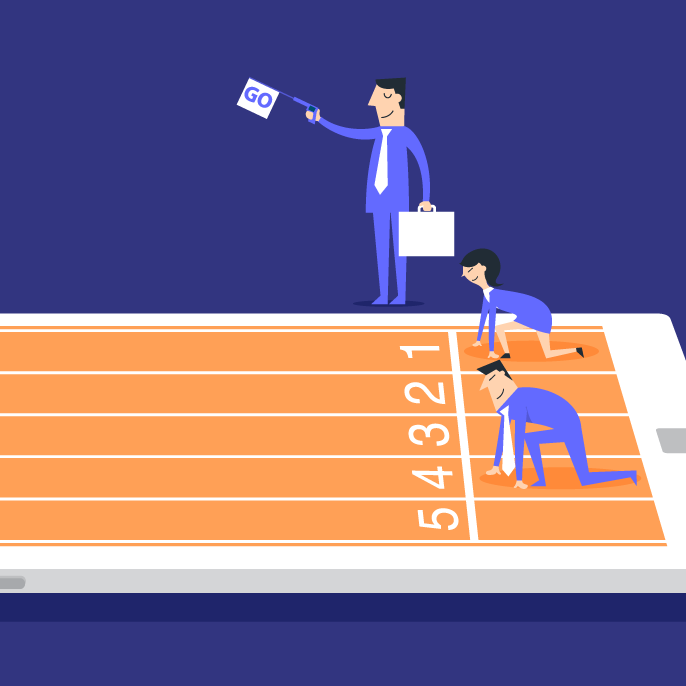 Ramp up productivity, even with team members working from home, with virtual sprint planning.