Productivity Survey: Want to be a Go-Getter? WFH, take more vacation, and get a dog

Countless productivity studies highlight sleep patterns, social media use, and other daily habits, but what are some of the other factors, particularly small ones, that can help people be more productive inside and outside of work? And are you already doing some of those things without even knowing it?

Recently, Lucidchart polled more than 1,000 U.S.-based office workers to get a better sense of what makes them productive. And while it’s no surprise that factors like a slow computer (50%), noisy colleagues (38%), meetings (30%), hunger (20%), and social media distractions (15%) at work are consistently keeping workers from being productive, what are some of the less-talked-about traits of the most productive (and unproductive) workers?

Check out our infographic below (click to enlarge or download) or continue reading to learn the habits that can make you more productive, from what to keep on your desk to what to watch on TV.

Who is most productive? 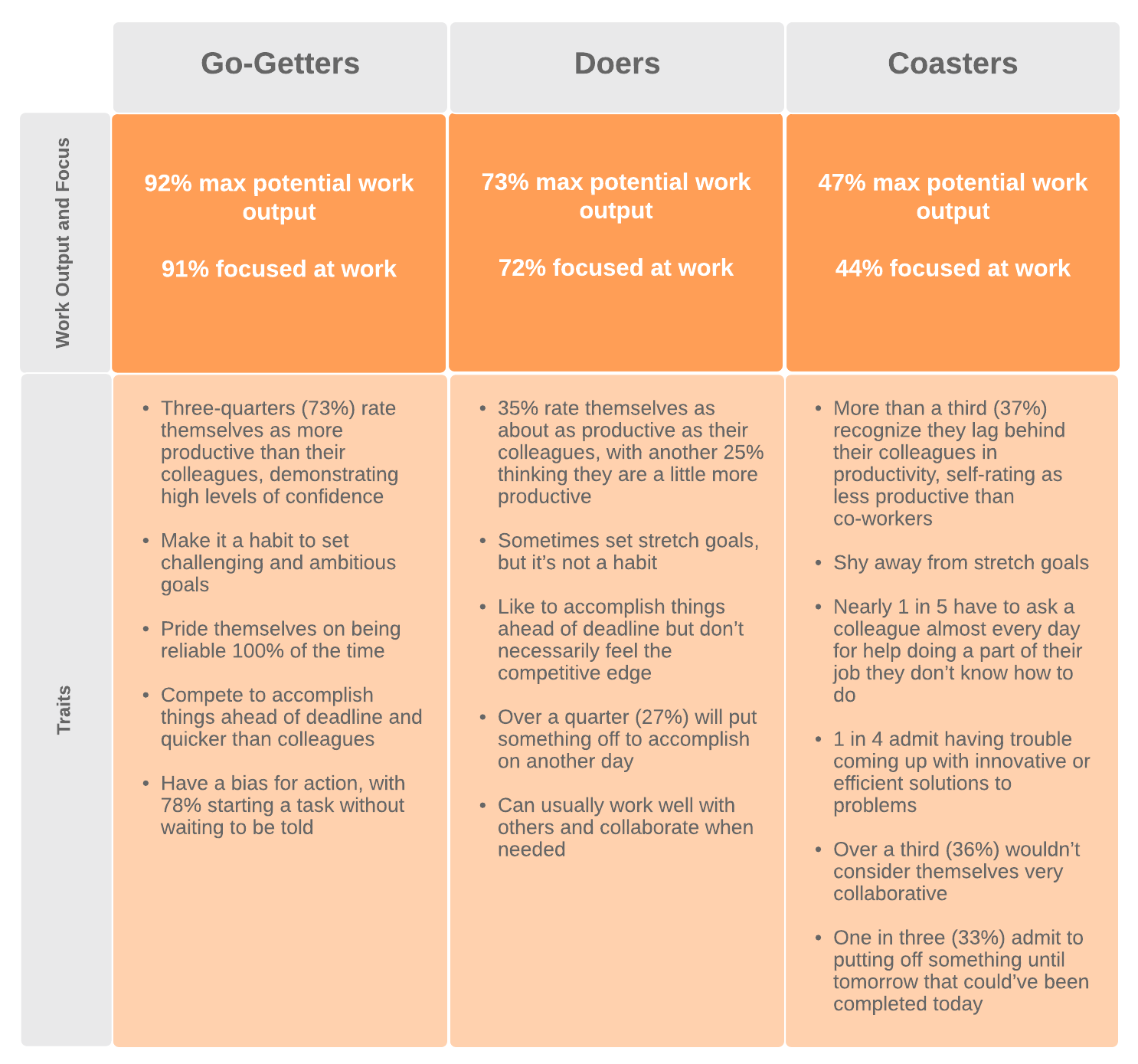 What do people do to stay productive?

Sticky notes may be the answer

When it comes to increasing productivity, one of the first factors to consider is your actual surroundings within the workplace. While elements such as having photos of your children and healthy snacks at your desk seem to drive productivity, you may want to keep the toys and junk food at home.

Productive people play as hard as they work

According to the data, the most productive people take more vacation, work from home more, and take notes by hand, and your boss might be a coaster.

Look for the digital divide

Go-Getters are most likely to take notes in a notebook during a meeting, as opposed to taking notes on their computer.

Ditch the diet, but don’t forget to exercise

Looking to increase your productivity at home? Whether it is keto, gluten-free, or vegan, productive people don’t bother with the latest diet trend, but they do keep their body moving as soon as their alarm rings.

The survey found that Coasters are the most likely to follow a specific dietary practice, with 11% vegetarian and 7% vegan; 67% of Go-Getters don’t follow any specific diet.

The most popular times for Go-Getters to exercise?

And while you may turn to soda for a quick mid-day jolt, it’s worth knowing that the least productive people are more likely to drink more caffeine, with 18% of Coasters drinking the equivalent of at least three 12-ounce caffeinated sodas a day compared to 13% of Go-Getters/Doers.

TV is a waste of time? Not necessarily.

While some may think getting in some good screen time may be a giant time suck, even the most productive people get their fair share. But the type of TV they are watching might be different than you think. In fact, the more productive the person is, the more likely they are to enjoy shows like “This is Us” and “NCIS” one episode at a time (44% of Go-Getters say they watch one episode weekly vs. 28% of Coasters), while Coasters prefer to binge on shows like “Game of Thrones” (21% of Coasters binge shows vs. 17% of Go-Getters).

Whether you watch alone or with a prime-time pet can make a difference, too: Go-Getters and Doers are more likely to have a dog (44%) than Coasters (35%).

A final thought... Sometimes productivity is completely out of your control—nearly a third of Coasters (31%) are the youngest children in their family (compared to 29% of Doers and 23% of Go-Getters). If that’s the case for you, maybe it’s time to plan your next vacation or slow down on binge-watching to bring more balance—and productivity—to your life.

An online survey was conducted in March 2019 among 1,030 U.S. adults who are employed full-time in a traditional office (desk-job) environment. Personas were developed using a K-means clustering analysis performed in R. Questions used to measure productivity focused on areas such as typical work output, focus, and engagement during the workday, along with the adoption of productive behavioral traits.