Tribal knowledge: Risks, benefits, and what to do about it

What is tribal knowledge?

Tribal knowledge refers to any unwritten knowledge within a company that is not widely known. This could be actual data, such as passwords, or more abstract knowledge, such as best practices and processes. Because it is unwritten, tribal knowledge is typically shared by word-of-mouth (if at all).

After working a job for a while, you’ll likely develop your own methods and tricks for accomplishing your tasks. Maybe the printer takes a couple of well-timed smacks to get going. Or perhaps certain bits of code stop working if you remove a seemingly unrelated line—you can’t say why, that’s just the way it is. (You’d be surprised how common this is!)

If you’re lucky, you learned these things during training and onboarding, when someone was kind enough to mention them. More often than not, however, you’ll have to acquire this knowledge—often called “tribal knowledge”—the old-fashioned way: through experience.

Similarly, countless co-workers will also be building their own stores of tribal knowledge. It’s inevitable, and on the surface, it seems harmless. From a managerial perspective, however, it’s a nightmare.

This knowledge isn’t written down, there’s no formal mechanism for sharing it, and it is limited to only a few employees. So what happens when they leave? Trust us—you don’t want to find out.

What is tribal knowledge?

In a post on his personal blog, Leonard Bertain, author of The Tribal Knowledge Paradox, describes tribal knowledge as “the collective wisdom of the organization.” He continues: “It is knowledge of the informal power structure and process or how things really work and how they ought to.”

Let’s take a closer look at some of Bertain's key points:

Let’s break it down even more: In companies, tribal knowledge refers to the unwritten knowledge of individual (or small groups of) employees that is not widely known.

As you can probably imagine, tribal knowledge can lead to a lot of inconsistencies across a company. Because of this, understanding tribal knowledge is crucial in the Six Sigma process. Six Sigma strategies focus on maintaining consistent, effective, and efficient processes across companies (especially in manufacturing). If each employee has their own way of doing things (based on their tribal knowledge), this is nearly impossible.

The problems of unretained tribal knowledge

Your goal with tribal knowledge should be to determine what parts of it are worth keeping and to retain them—a process often called “capturing” tribal knowledge. This simply means taking tribal knowledge, which is by definition undocumented, and creating some form of documentation. (More on that process later.)

If you’re thinking this sounds like a lot of work, you’re right! It’s not always the easiest task. So why bother? The answer is simple: Unretained tribal knowledge can lead to countless headaches and roadblocks down the line. These might include the following:

If your employees rely on tribal knowledge to complete tasks more often than not, it’s time for you to examine your onboarding processes. Are you providing new hires with the instruction and resources they need to succeed in their job? A reliance on tribal knowledge amongst employees might be the result of sink-or-swim onboarding. New hires are left to figure things out on their own, learn from a co-worker (who likely figured things out on their own), or fail in their position.

Obviously, this isn’t the best way to onboard new employees. Not only does it slow the onboarding process down, but it also places an undue burden on your veteran employees. In order to succeed, new hires have to constantly turn to the old-timers to pass on tribal knowledge.

In any workplace, employees should maintain this rule of thumb: If you’re struggling to solve a work-related problem, ask around. Chances are, someone else has faced a similar problem in the past, and if you’re lucky, they’ve already come up with a solution.

There’s also a good chance that the solution is completely undocumented: The problem arose, they solved it, and thinking nothing of it, they kept on working. And each subsequent time the problem arises, they know how to solve it. If their solution remains undocumented (or unretained), other employees may spend hours solving the exact same problem.

The benefits of retaining tribal knowledge

Based on the last section, you’ve probably been able to infer some of the benefits of retaining tribal knowledge. (Here’s a hint: They’re the opposite of the problems listed above.) But if that’s not enough to convince you to capture your company’s tribal knowledge, maybe some of these benefits will.

Hold on to important information

No employee will be in the same position forever—people retire, change roles, take periods of leave. And as employees leave, you should be able to take the changes in stride. If there were passwords, techniques, or processes that that employee—and only that employee—knew, you’re in trouble.

By retaining those bits of tribal knowledge and documenting them, you avoid potential disaster. If an employee leaves, you will have all the necessary materials and knowledge to onboard and train a replacement.

Your oldest employees have likely learned a lot on the job, but there’s no reason for new hires to go through that same trial-and-error process. Ask veteran employees to help create onboarding materials. In doing so, you are able to document their tribal knowledge which will help new hires perform to their full potential faster.

The worst thing about tribal knowledge is how it spreads unpredictably and inconsistently. Because it is unwritten, tribal knowledge is shared within a company largely by word of mouth, meaning it will never reach some employees. What’s more, not all tribal knowledge is good. The information that does get spread might include incorrect practices, shortcuts, and the like.

If you retain your employees’ tribal knowledge, however, you can sift the good from the bad. From there, you can share improved techniques and practices with the entire team or organization to help all employees perform better.

How to capture tribal knowledge

Ask employees to document their knowledge

Nobody knows a job better than the people working it. This might seem obvious, but too often managers and other higher-ups put together onboarding materials and other company documentation without consulting their employees.

As you build out documentation, rope knowledgeable employees into the process. Ask them to record their day-to-day tasks and the steps they take to complete them.

Create a single source of truth

One danger of tribal knowledge is that it tends to create knowledge silos. Because it is unwritten, tribal knowledge is rarely shared between individuals, much fewer teams and departments. Creating a single source of truth is a great way to encourage the sharing of information and knowledge within your company.

Ideally, a single source of truth is cloud-based. This allows employees across various teams, departments, and locations to update and access the document, spreading a lot of would-be tribal knowledge.

Whether it’s flowcharts, UML diagrams, or some other form of visual documentation, diagrams can be a great tool for cutting down on tribal knowledge. By outlining processes in a diagram, you can establish a clear methodology for your employees to follow instead of relying on tribal knowledge.

Document as you go

Perhaps one of the best ways to capture tribal knowledge is to document as you work on a project or process rather than creating documentation as a separate task that comes as an afterthought. When you use real-time visuals as your documentation, you turn static documents into living blueprints of your organization that show employees where you’ve been and where you’re going. A living blueprint is a system of record of a company’s ideas, plans, and designs. The work itself becomes the documentation.

For example, if a leadership team uses a virtual whiteboard to plan OKRs during a meeting, that board can be used going forward as a working document. 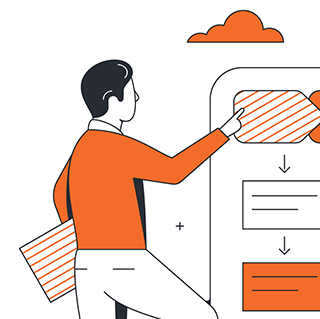 Why visuals are the best method of process documentation

The go-to toolkit for effortless documentation