10 Internet Marketing Tips I Learned As a Novelist

In the past twelve years I’ve had thirteen books published: nine novels and four novellas. I’ve contributed to three anthologies, co-editing one of them. I’ve been published in nine languages.

These were not business books. The majority were science fiction and for a young adult audience. My bestseller was about androids. One book was a romantic comedy. One was a steampunk, alternate history, old west, King Arthur book. My point? I’m not exactly Stephen Covey. But somewhere along the line I fell in love with marketing, went back to school for an MBA, and ended up in the corporate world.

There are a lot of rules in writing, and I’ve found that many of them are universal—they can apply to most anyone, writer and non-writer alike.

Here is a list of 10 writing rules that make the best internet marketing tips.

When I first had an idea for a book, I went to my brother to tell him about it. He was in college studying English. I was at a different school studying political science. I told him my idea, and then told him that he was a writer—he should write it. He very patiently explained that he already had a lot of other ideas, and that I should try to write it myself.

He gave me this advice: “Everyone has an idea for a book. Everyone says that one day they’re going to sit down and write the Great American Novel. The difference between writers and everybody else is that writers actually do it.” They sit down, butt in their chair, hands on their keyboards, and they work.

The same applies to business. Great business ideas are a dime a dozen. The difference between entrepreneurs (including people in a company with an entrepreneurial spirit) and everyone else is that entrepreneurs roll up their sleeves, accept the risk, and dive in head first.

2. “It's like everyone tells a story about themselves inside their own head. Always. All the time. That story makes you what you are. We build ourselves out of that story.” —Patrick Rothfuss

The human mind is drawn to stories. PET scans prove that when stories are told, our brains light up like Christmas trees. Stories make things easier to understand, and easier to remember. From Aesop teaching life lessons with animal-based fables, to Jesus Christ teaching in parables, to Thomas Moore discussing utopia, stories have power behind them.

Look at the chart below. Stories begin with exposition (the setup) then hit an inciting incident—the call to action. This is Bilbo getting invited on the trip to the lonely mountain, or Huckleberry Finn running away with Jim. It’s what starts you on your journey. Tensions rise, things get worse, until we finally hit the climax where good triumphs over evil (most of the time). Then we have falling action—things calming down and getting back to normal—and we finally end with the resolution, where the trouble has subsided and we are now in a better situation than we were before. 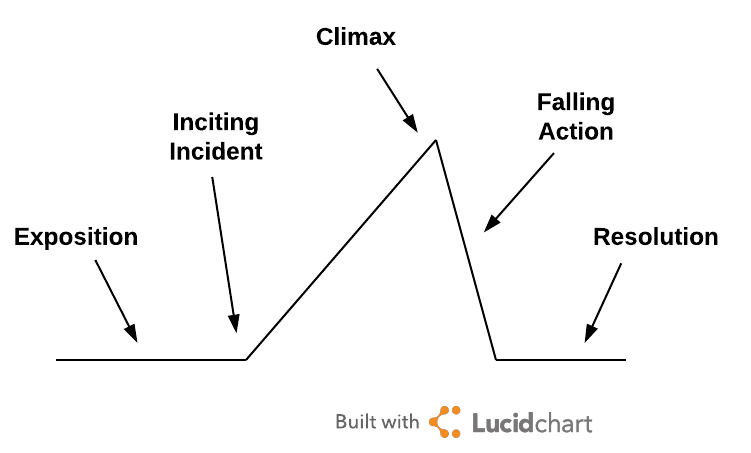 This applies to everything we do in marketing. Think of case studies: We see a company puttering along, until a problem arises (or has arisen a long time before and is just now coming to a head). That’s our inciting incident. Tension builds as the customer is looking for solutions and things are getting worse. Finally, they come into contact with your product and you solve the problem! Things get better, and in the resolution we see the evidence of success. To put it simply: Problem → Solution → Results.

3. “Using adverbs is a mortal sin.” —Elmore Leonard
“I believe the road to hell is paved with adverbs, and I will shout it from the rooftops.” —Stephen King
“Kill all the adverbs!”  —JK Rowling

What’s so wrong with adverbs, and how do they have anything to do with marketing?

First: what is an adverb? Generally speaking, they’re words that end with “ly”; cheerfully, angrily, stoically, tiredly, etc. You find them most often in books after the word “said.” “I’m getting the cheesecake!” he said excitedly. “What’s the big idea?” he said cynically. “I hate it here,” she said angrily. And so on.

In those examples, the adverb is a crutch. It tells you what’s going on instead of showing it. Compare these two sentences: “I need sleep,” she said tiredly, to “She stretched and yawned, her eyes drooping shut for just a moment. ‘I need sleep.’” In the former example we’re being told that she’s sleepy. In the latter, we are seeing that she’s sleepy, and it makes the visual better—easier to remember and understand.

Why are adverbs bad? Because you’re not showing your readers proof of anything; you’re telling them what to think. It’s a lazy way to write, and it’s a dangerous way to market. No one trusts a salesman—everyone knows that a salesman has just one thing on his mind: making a sale. So, when a salesperson tells you what to think: “Our product is the best,” you will find resistance to the idea much more than if you can demonstrate its quality through supporting information. If they say, instead, “Our product is the best, and here’s the documentation we have that supports that, and here are customers who will give recommendations,” your sale will go much easier.

This is very similar to the previous point. It’s not just about exclamation points—it’s about overflowing with non-stop excitement to the point where an exclamation point doesn’t mean anything anymore.

I once worked for a company that did so much email marketing, we began sending our members more than two emails a day. Everyone realized it was a problem: when you have so many sales and offers and newsletters coming at you—multiple departments fighting over time to shout their message from the rooftops—people get desensitized to the constant barrage of noise. And then they unsubscribe.

5. “Change your mind. Good ideas are often murdered by better ones.” —Roddy Doyle

Don’t be afraid to change your mind. While it is important to choose a strategy and see it through to the end, you should never be afraid of a good idea—or, never be afraid to reverse a bad one. In marketing, we’ve seen many companies need to halt and turn around. A good example is The Gap, which introduced a new logo several years ago. Despite spending more than a million dollars on its rollout, intense consumer backlash made The Gap retract its entire campaign in less than a week.

6. “Only bad writers think that their work is really good.” —Anne Elright

It’s one thing to have pride in your company. It’s another thing to chase after an ego-driven quixotic quest. I once worked for a company whose CEO was so insistent on breaking a world record that he literally fired people who didn’t believe it was a good financial decision. Yes, he made the news, but at an enormous cost in both money and human capital, and it didn’t win any new accounts. 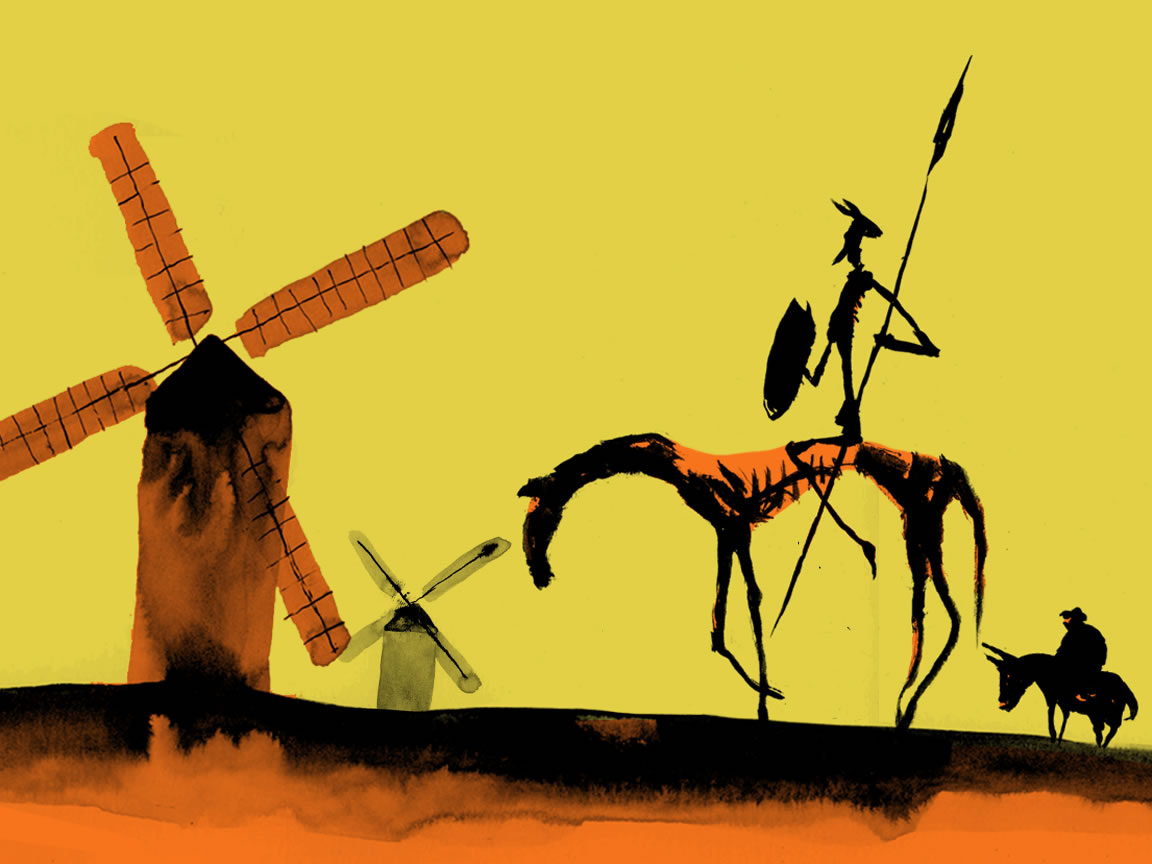 On a smaller scale, I’ve worked with a lot of marketing people who assume they know the business so well that they don’t need to perform market research or A/B testing, or collect any data before they make a decision. While, yes, experience counts for a lot,  experience plus numbers counts for a lot more.

7. “Remember that, sooner or later, before it ever reaches perfection, you will have to let it go and move on and start to write the next thing. Perfection is like chasing the horizon. Keep moving.” —Neil Gaiman

You’re never going to produce anything that’s perfect. You can do something good. You can even do something great. But you can never get to perfect. There is always something that you’re going to want to change. Remember the first rule I mentioned above? “Write.” Well, Ray Bradbury had a second rule of writing which was “Stop Writing.” Eventually you need to accept what you have and move on.

I recently was the ghost writer for a trilogy of novellas. On the first one, the editors really nitpicked everything I wrote, at one point giving me the following note (after three drafts): “Virtually every scene and every character needs to be rethought and rewritten.” What was supposed to be a four-month project stretched to nearly a year. But they had spent so much time fighting over the first book that we were up against tight deadlines for the third. We only had time for one round of revisions. And do you know what? That third book is so much better than the first one that we beat to death.

The same is likely the case with so much of what we do in marketing. Yes, we should seek to produce the very best content, collateral and promotions we can, but eventually we need to step back, brush our hands off, and accept it for what it is.

8. “Write a book you'd like to read. If you wouldn't read it, why would anybody else?” —Hilary Mantel

The same goes for a piece of content, or an ad, or a press release. Too often, we write something to check a box—we’ve blogged for the week, or we’ve rushed through our Facebook page to see if anything needs attention. But are we really giving it our all?

I’m guilty of this. I wrote a web page the other day that I knew was boring. Yes, it fit all of the goals for the page—it hit on all the right topics, it was carefully evaluated to make sure that it would get a good Google ranking. But, man, it was dull.

This quote, I think, translates directly from writing to marketing. Meaning: I’m not saying that you should read books on marketing and write lots of marketing collateral; I’m saying that you need to read books about lots of things and write about lots of things. If you don’t read, you can’t write. It’s as simple as that. That’s not to say that you are stealing ideas from other books, but, rather, you are learning how ideas are organized, how sentences are put together, how imagery and metaphor and rhetoric work. Reading fills the well from which you draw your creativity.

Finally, one of the best internet marketing tips is a bit of advice from the 1800s that is just as relevant today as it was then:

Robison Wells, Senior Content Marketing and Communications Strategist, has his MBA in marketing from Brigham Young University. He has written thirteen books, translated into nine languages. He has a service dog named Annie, who is more popular than he is.

Diagram Your Way to Marketing Success